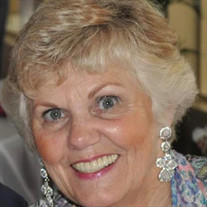 Judith McCown Murphy Baker (Judy) was born August 11, 1941 in Manchester, NH to the late Gordon and Kathleen McCown. She graduated from Manchester Central High School in 1959 and married James Robert Murphy (Jim) in October of 1960. Together they raised two daughters and the family of four traveled the world during Jim’s 27-year career as an officer in the United States Air Force. After Jim’s return from Vietnam in 1972, they each made decisions to become followers of Christ and the church became the centerpiece of their lives. Faith in and service to the Lord is what defined them both. They put down roots in Maryland and Jim eventually retired from the Air Force and began work in the private sector. Judy kept busy with her hobbies of antiques and interior decorating. For a time, she owned and operated a gift shop in Upper Marlboro, Maryland. She was a gifted and talented artisan who made the most beautiful and unique hand-crafted items. She considered her role as a mother and grandmother to be the most important “job” in the world and she was the very best at it. The highlight of her life was the arrival of her three precious grandchildren. Judy lived three years as a widow after Jim’s passing in 2005. She enjoyed traveling and spending time with friends and family, especially her grands. She remained a true daughter of New Hampshire and treasured every opportunity she got to return. 2008 brought an unexpected gift to her life. After a whirlwind courtship, Judy married Paul Baker in November of that year. They began to travel and simply enjoy life to the fullest! They moved full time to The Villages, Florida in 2015 and were members of Celebration Baptist Church in Leesburg where they served and made wonderful friends. Judy was blessed beyond measure all her life and she would tell you without hesitation that she truly had Wonderful Life. Judy had a remarkable sense of style and she loved to dance! To family and friends, the words that come to mind when we think of her are generous, loyal, vivacious, loving, fun, vibrant, witty, sincere, beautiful, a fabulous story-teller, and SPARKLY! She was, and remains, adored, and admired. Everyone who knew her loved her. It was impossible not to; her spirit and love for life and for others was infectious. Judy is survived by her husband, Paul Baker; her two daughters Jennifer Gooding (Butch) and Stacey Bishop; her grandchildren Katie, Olivia, and Jacob Bishop; son-in-law Robert Bishop; brothers William McCown (Gail) and Gordon McCown, Jr. (Cindy); sister-in-law Nancy Dyer; and many beloved nieces and nephews. She also considered it a privilege to be stepmom to Paul’s children: Sherry Meyer (Rodney), Tommy Baker, and Steve Baker (Debra), as well as his grandchildren, Carolyn Fritchie (Anthony), Suzanne Baker, Christopher Meyer, Maura Baker and great grands Ava and Scarlett Fritchie. The family will receive friends at Riverdale Baptist Church, 1177 Largo Road, Upper Marlboro, MD 20774 on Monday, April 12, 2021 from 10:00 AM to 12:00 PM where a Funeral Service will be held at 12:00 PM. Interment will be held at Pine Grove Cemetery, 450 Calef Road, Manchester, NH 03103 on Friday, April 16, 2021 at 1:00 PM. In lieu of flowers, memorial donations may be made to Celebration Baptist Church in Leesburg, Florida.

Judith McCown Murphy Baker (Judy) was born August 11, 1941 in Manchester, NH to the late Gordon and Kathleen McCown. She graduated from Manchester Central High School in 1959 and married James Robert Murphy (Jim) in October of 1960. Together... View Obituary & Service Information

The family of Judith "Judy" M. Baker created this Life Tributes page to make it easy to share your memories.

Send flowers to the Baker family.