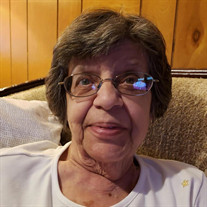 Julie A. (Maffei) Finch, of Brandywine, Maryland passed away on Saturday, December 11, 2021 after a long and courageous battle with cancer. She was born June 11, 1940 in Exeter, the daughter of the late George P. Maffei and Giovita Nevola. She was predeceased by her husband Richard H. Finch. Also, preceding her in death, were her sisters: Susan Begliomini, Carolyn Burns, Vicki Stewart, Josephine Balberchak, sister in law Sandra Maffei, an infant brother John, brothers in law: Elmo Begliomini, James Burns, William Stewart, Frank Crowley, Sr., and Joseph Balberchak, Sr., nephews: James Burns, George P. Maffei, and Kevin Burns; daughter in law Terri Lee Finch. Julie was a graduate of Exeter High School, Class of 1958 and thereafter attended business school for Banking and Financing. During Julie's professional career, she worked for banks in New York City (Empire State Building) and in the Bank of Brandywine, Brandywine, Maryland, later accepting a position at Brandywine Auto Parts as Executive Secretary, which she held for over 36 years until her retirement in 2016. Julie was very active in her church. She was a member of Forest Park Baptist Church and also attended the Brandywine Bible Church. Julie was devoted to her husband, children, and grandchildren. Family was the greatest joy in her life and she was a remarkable mother and grandmother. Dancing was one of her greatest passions. There wasn't a song she wouldn't dance to!!! When she was younger, she was scheduled to appear on American Bandstand, but as luck would have it, the bus broke down on the way never making it! She also enjoyed the Hallmark Christmas movies and collecting the Hallmark Christmas ornaments, figures, and other Christmas embellishments. The legacy of Julie's selflessness, humbleness, kindness, and giving spirit will live on through her family. Surviving are her sons: Jerry Finch and Kathy of Waldorf, Maryland; Henry Finch and companion Barbara Posey all of Brandywine, Maryland; grandsons: Randy Finch and Amanda, Danny Finch and Taylor, also of Maryland; greatgrandchildren: Eli, Olivia, Mia, and Finn Finch; step grandchildren: John Dickerson, Terri Tickle, Kimberly Tickle, Buddy Tickle, Kristina Tickle, and Lexi McCoy. Julie is also survived by her sister: Jennie Crowley, California, brother, Carmen Maffei, Shavertown, PA and Riveria Beach, Florida and many nieces and nephews. The Finch family would like to thank the nurses of Genesis Healthcare in Waldorf for caring for Julie, along with all friends who provided meals for her during her stay. Family and friends are welcome to gather at Lee Funeral Home, Inc., 6633 Old Alexandria Ferry Rd., Clinton, MD, 20735, on Wednesday, December 22, from 4pm-7pm. A funeral service will be held on Thursday, December 23, at 11am. Burial will follow at Resurrection Cemetery. Memorial contributions may be made to The American Cancer Society at donate3.cancer.org

Julie A. (Maffei) Finch, of Brandywine, Maryland passed away on Saturday, December 11, 2021 after a long and courageous battle with cancer. She was born June 11, 1940 in Exeter, the daughter of the late George P. Maffei and Giovita Nevola. She... View Obituary & Service Information

The family of Julie Ann Finch created this Life Tributes page to make it easy to share your memories.

Julie A. (Maffei) Finch, of Brandywine, Maryland passed away...

Send flowers to the Finch family.