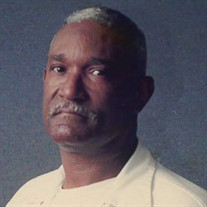 Kearns William Rice was born on May 29, 1937 to the late Ravenelle William Rice and the late Johnsie Mae (Bennett) Rice in Washington, DC. He is preceded in death by both parents, a loving grandmother, Maefield Bennett and a loving granddaughter, Lequoina Bivens. Kearns attended public school in North Carolina, New York and Washington, DC before joining the United States Navy in 1955, where he served until 1963. As a young man, he was baptized and confessed with his mouth and believed in his heart that Jesus is Lord. Kearns married Deborah Lee in 1969 and remained married for 47 years. Kearns worked for the DC Department of Public Works for 32 years. He retired on December 31, 1994 and immediately went into grandfather mode, affectionately called “PaPa” by his grandchildren. Kearns had a special relationship with his grandson, Joshua whom he raised. During his retirement years he enjoyed life to the fullest and tried to maintain contact with family and friends. He loved traveling up and down the road to visit his family in North Carolina. He loved and cherished any time he spent with his family. He loved all sports and never grew tired of watching them. He enjoyed old western movies and was a great fan of James Bond. He enjoyed all music genres, but jazz was his favorite. He was very introverted but was known to be the life of the party every now and then. He didn’t talk much but if he had something to say he would speak his mind. He was known for his firm handshake and he never lost his grip. He was kind and polite to everyone. He was proud to say that he had nine children and loved them very much. In 2018, Kearns’ health started to decline during which time he was placed in Bradford Oaks Nursing Home in Clinton, MD. On Monday, April 19th, 2021, our beloved peacefully and quietly transitioned from labor to reward and went home to be with the Lord. Kearns leaves to cherish his loving memories, Life-time Partner and friend: Deborah Lee Rice of Fort Washington, MD; Nine children: Yule Atkinson, Tua McBride and Karen Colten of Fayetteville, North Carolina; Gerald Wylie of Lake Wylie, South Carolina; Troy Lee Anderson and Donna Marie Hayes (Van Sr.) of High Point, North Carolina; Tyran Charles Rice (Leslie) of Washington, DC; Kearns Chester Rice and Kuron Wyndie Rice of Fort Washington, Maryland. Grandchildren: Kourtney Atkinson and Lakisha Wylie of Fayetteville, NC; Tequoina Bivens, Darrica Terry, Keosha Wylie, Chasity Hayes and Van Hayes, Jr. of High Point, NC; Tyran Harding of Rocky Mt., NC; Joshua, Breona and Elijah Rice of Washington, DC; Jordan Gaines and Avery Rice of Fort Washington, MD. Great-grandchildren: Josiah, Lennox and Lyric Wylie; MaKayla and Damani Terry; Sa’Rai Bivens; Zashawn and Honest Harding; King and Kani Tutus; Princess and Joy Rice. Two Sister-in-laws: Patricia Lee of Upper Marlboro, MD and Sandra (Jerry) Williams of Temple Hills, MD; Brother-in-Laws: Norman Lee of Washington, DC & Bernard Sullivan of Huntington, MD. Cousins: Trent (Gloria) Walker of Fort Washington, Maryland; Barbara Rice Armstrong, Ronnie Rice and Pat Rice of Washington. DC. and as well as a host of nieces, nephews & friends.

Kearns William Rice was born on May 29, 1937 to the late Ravenelle William Rice and the late Johnsie Mae (Bennett) Rice in Washington, DC. He is preceded in death by both parents, a loving grandmother, Maefield Bennett and a loving granddaughter,... View Obituary & Service Information

The family of Kearns William Rice created this Life Tributes page to make it easy to share your memories.

Send flowers to the Rice family.