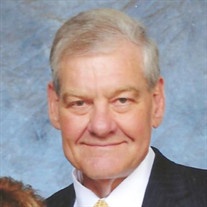 Larry Lee Weckbaugh passed away unexpectedly on March 1, 2020 due to complications of cardiac arrest. He was born in Topeka, Kansas on May 7, 1953 to Ethel and Lee Weckbaugh. Larry attained the rank of Eagle Scout at the young age of 14, graduating in 1971 from Highland Park High School in Topeka, Kansas. He was appointed to the Naval Academy, graduating with the class of 1975. Following graduation, Larry attended nuclear power school and then was assigned to the USS Texas CGN39. He served in the Navy for 5 years, achieving the rank of Lieutenant Commander in the reserve. Following his time in the Navy, he joined Baltimore Gas and Electric at Calvert Cliffs Nuclear Power Plant. His 38 year career began at Baltimore Gas and Electric and spanned to Exelon. On June 6, 2014, Larry retired as the Exec Director of the supply chain for 5 nuclear power plants on the East Coast. Larry was involved with Calvert Hospice, the Calvert County Chamber of Commerce. In retirement he devoted himself to veterans issues, receiving an appointment by the Governor of Maryland to serve on the Maryland Veterans Home Commission. He married Raleigh Renick, of Rocky Mount, VA on October 22nd 1977 in Williamsburg, VA. Following his navy career, they moved to Dunkirk, Maryland in 1980. Larry is preceded in death by his parents Ethel and Lee Weckbaugh. He is survived by his wife of 42 years, Raleigh Renick Weckbaugh; his children Todd (Andrea) Weckbaugh of Fishers, IN and Casey Kwitkin (Gary) of Catharpin, VA, his 5 grandchildren Addison, Carolyn, Connor, Camden and Cooper; His brothers Gary (Marcia) Weckbaugh of Topeka Kansas and brother Terry Weckbaugh of Kansas City, Kansas; in laws, Rev. Van and Kathryn Renick, of Rocky Mount, VA and brother-in-law Van Renick, Jr of Roanoke, VA along with his nephew, nieces and numerous cousins. The family will receive friends at Jesus the Good Shepherd Catholic Church, 1601 West Mount Harmony Road, Owings, MD 20736 on Wednesday, March 4, 2020 from 6:00 – 8:00 PM and Thursday, March 5, 2020 from 9:30 – 10:30 AM where a Mass of Christian Burial will be celebrated at 11:00 AM. Interment will be private. Memorial contributions in memory of Larry Weckbaugh can be made to Charlotte Hall Veterans Home for specialty wheelchairs. Please mail to: ATTN: MDVA Charlotte Hall Veterans Home 29449 Charlotte Hall Road Charlotte Hall, MD 20622 To send flowers or a memorial gift to the family of Larry Lee Weckbaugh please visit our Sympathy Store.
To order memorial trees or send flowers to the family in memory of Larry Lee Weckbaugh, please visit our flower store.