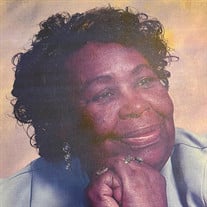 Today we celebrate and honor the life of Laura Jean Barnes, who on Monday, November 22, 2021 was called home at the age of 95. Laura was a beloved mother, grandmother, great-grandmother, aunt and friend who will forever be remembered in the hearts and minds of all who were blessed to know her. A native of Lancaster, South Carolina, Laura was born on January 27, 1926. She was the 4th child of five children born to the late John C. McMullen and the late Doshia Barnes McMullen. She graduated from Lancaster Training High School May 1943. She married her high school sweetheart Freddie Lee Barnes in 1947, who preceded her in death in 1989. Their union was blessed with 5 children. After relocating to Washington, DC, Laura was employed at George Washington Hospital Center in 1964 as a housekeeper and after training was promoted to the position of nursing assistant. She was a dedicated employee for 27 years and retired at the age of 65. Laura received her Certificate of Completion for the course of study for Vacation Bible School in 1998 from Maple Springs Baptist Church and joined the church thereafter. For 23 years, she was a dedicated servant. Laura also was a volunteer in the Youth Outreach Program as a Foster Grandmother where she mentored troubled youth. She was known to them as a great listener and caring person who never judged them for their past life situations. Laura was born into a loving and thoughtful family. Preceding her in death were her two sons, Darryl Lewis Barnes (Leatrice) and Donald Lee Barnes (Juanita); brother, John C. McMullen; sister-in-law, Mary McMullen; and two sisters, Ethel Cecile McMullen Duren and Mary Eugenia McMullen McKim; brother-in-law, James McKim. Those left who will cherish her memory are her son, Fred C. Barnes (Kimberly) of Temple Hills, MD; two daughters, Linda Diane Stevenson of Washington, DC and Sheila Barnes Branch (Frank) of Lanham, MD; eleven grandchildren and thirteen great-grandchildren, and a host of nieces, nephews, cousins and dear friends.

Today we celebrate and honor the life of Laura Jean Barnes, who on Monday, November 22, 2021 was called home at the age of 95. Laura was a beloved mother, grandmother, great-grandmother, aunt and friend who will forever be remembered in the... View Obituary & Service Information

The family of Laura Jean Barnes created this Life Tributes page to make it easy to share your memories.

Today we celebrate and honor the life of Laura Jean Barnes, who...

Send flowers to the Barnes family.