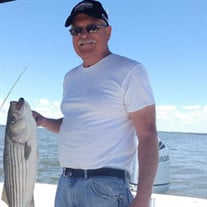 Lawrence (Larry) Raymond Batch, Jr. of Fort Washington, Maryland passed away peacefully on Wednesday, September 8, 2021 after battling cancer since 2019. Larry was born on April 27, 1950 in Washington, DC to the late Lawrence Raymond Batch, Sr. and Marion Harris(Ferguson). Many know Larry from his time at Dick's Auto Service in Clinton, MD. He began his career at Dick's Auto at the age of 17 and worked hard for many years working his way up to co-owner until his retirement in December 2019. Larry Enjoyed cars, boating, fishing and enjoying time with his family, friends and dogs. Larry was a husband, father, grandfather, brother and uncle who leaves behind his beloved wife of 42 years Helen Batch (Nelson); children: Bryan Batch, Laura (Todd) Pede, Charles Batch; grandchildren; Garrett Batch, Olivia Pede, Bentley Batch and Lucas Pede; siblings James Batch, Sr. and Dorothy Batch; several nieces and nephews. Visitation will be held on Thursday, Septemter 16 from 10 a.m.-12 p.m. at Lee Funeral Home in Clinton, MD, with a service immediately following. Burial to follow at Trinity Memorial Gardens in Waldorf, MD. In lieu of flowers, donations can be made to the American Cancer Society at 1-800 227-2345.

The family of Lawrence Raymond Batch, Jr. created this Life Tributes page to make it easy to share your memories.

Send flowers to the Batch, family.