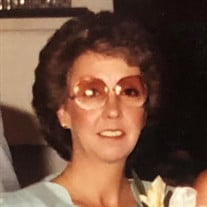 Linda Gail Wood, 72, of Prince Frederick, MD, passed away peacefully on Tuesday, September 29, 2020. She was born September 15, 1948 in Prince Frederick to the late Thomas and Garnett Wood. She was preceeded in death by her husband Barry C. Wood Sr., and a sister Beverly Horstkamp. Linda is survived by her son, Barry C. Wood, Jr. and his wife Kimberly of Prince Frederick, and three grandchildren, Aaron, Kara, and Luke Wood. Linda retired from the United States Postal Service with over 35 years of service; including Postmaster at both Prince Frederick, and St. Leonard. She filled in at many locations around the area as the need arose. Prior to the USPS, she worked at Tommy’s Crab House, IGA, A&P, and also at home on the farm her entire life. She enjoyed her grandchildren, her dogs, especially the Dobermans “Raven”, “Mykkyy”, “Asta”, and “Beau”, her one eyed cat “Popeye”, and her most recent dog, a large Poodle named “Baxter”. Despite three bouts with cancer, she never let that slow her down. She always helped anyone and everyone along the way that needed her help, including her mother and sister when they were sick. She worked until retirement from the Post office five years ago and then took care of her husband Barry, Sr. when he became sick and passed in 2017. She was everything for everybody and seldom took time to think of herself. She will be sorely missed for a very long time. A viewing will be held at Lee Funeral Home Calvert, 8200 Jennifer Lane, Owings, MD 20736 on Friday, October 2nd from 11 am until start of Funeral Services at 1 pm. Burial will follow at St. John Cemetery, 4255 Hallowing Point Road, Prince Frederick, MD 20678. NEW GUIDELINES FOR ATTENDING VISITATION / SERVICES. - 50 to 75 people max at any given time in Funeral Home. - Limit visitation to 15 minutes in visitation room to allow for others to express their condolences. - Funeral Services in Chapel limited to 70 people with four (4) people per pew. - Masks and six foot social distancing still applies.

Linda Gail Wood, 72, of Prince Frederick, MD, passed away peacefully on Tuesday, September 29, 2020. She was born September 15, 1948 in Prince Frederick to the late Thomas and Garnett Wood. She was preceeded in death by her husband Barry... View Obituary & Service Information

The family of Linda Gail Wood created this Life Tributes page to make it easy to share your memories.

Send flowers to the Wood family.