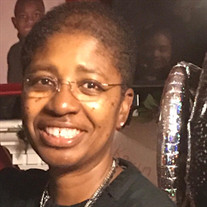 Lisa Maria Henry was born May 24, 1962 in Landstuhl Germany. She was the second of five children born to the late William Alfred Henry and Alma Beatrice Henry. She departed this world on August 22, 2021. She was preceded in death by her parents William and Alma Henry. Lisa was baptized at an early age at Mount Vernon Baptist Church in White Stone, VA. Lisa was educated in the Prince George’s County Maryland Public School System and graduated from Central High School in 1980. In October 1980, Lisa joined the U.S. Air Force where she would begin her career as a Health Service Management Journeyman (Medic). She decided to cross-train into the Aviation field as an Air Traffic Controller. Her 26 year career led to duty stations at: Kusan AB, Korea; Homestead AFB, Florida; MacDill AFB, Florida; Robins AFB, Georgia; AL Kharj AB, Saudi Arabia; Grand Forks AFB, North Dakota where she was inducted into the Senior Noncommissioned Officer Corps of the U.S. Air Force; Tinker AFB, Oklahoma; and lastly, returning to Robins AFB, Georgia where she retired in July 2007. While in the service, Lisa was a role model to all who served with her. She truly lived and breathed the core values of the Air Force: Integrity First, Service Before Self, and Excellence In All We Do as she volunteered for deployment orders in support of Hurricane Andrew’s humanitarian and disaster relief efforts in 1992. Lisa was also an advocate for the pursuit of academics and education. She received her Associate Degree in Airway Science through the Community College of the Air Force. She settled in Byron, Georgia where she began her second career as an Air Traffic Control Instructor at Middle Georgia State University where she received her Associate in Science in Professional Aeronautics and Bachelor of Science in Professional Aeronautics from Embry-Riddle Aeronautical University; and receiving her Master of Commercial Aviation Degree from Delta State University. She was promoted to Assistant Professor in 2014. Lisa’s stellar career was filled with many highlights. One of the highlights was when actor Jeff Goldblum recently visited Middle Georgia State University to interview Lisa and discuss the day-to-day education process of Aviation and Air Traffic Control (will air on the Disney Channel this fall). Although Lisa didn’t have any children of her own, she volunteered her time with various children and senior organizations. She was a participant of Adopt-A-Highway Program, Founder of Women In Aviation Chapter at Middle Georgia State, and was honored as Executive of the Year for Biltmore Who’s Who 2011-2012 and Covington Who’s Who 2014. She was a consummate professional and trailblazer. Lisa was the exemplar of courage during her brief battle with cancer. She leaves to cherish her memory: her devoted siblings Ava Noreen Stanley, Paul Vincent Henry (Eva), Michele Renee Henry, and Kevin Louis Henry, Sr. (Angela); nephews Michael Stanley, Kevin Henry, Jr., Kirk Mattu; nieces Michaela Henry and Megan Mattu; one great-nephew Christian Blair; very special friends Brenda Scott, Tina Denise, and Angela Taylor; and a host of family, friends, and loved ones. Please visit our Mrs. Lisa Maria Henry's obituary on Saturday for live streaming. https://youtu.be/Ug0jMNhhkGs

Lisa Maria Henry was born May 24, 1962 in Landstuhl Germany. She was the second of five children born to the late William Alfred Henry and Alma Beatrice Henry. She departed this world on August 22, 2021. She was preceded in death by her parents... View Obituary & Service Information

The family of Lisa Maria Henry created this Life Tributes page to make it easy to share your memories.

Send flowers to the Henry family.