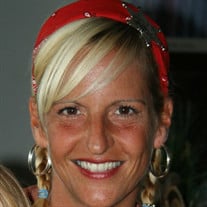 Lisa Anne Minakowski (Simmons), 51, of Huntingtown, MD, formerly of Avalon, NJ, and San Clemente, CA, passed away Sunday morning, March 21, 2021 in Baltimore due to complications from metastatic breast cancer. Born in Morristown, NJ she is survived by her bereft husband, Christopher Minakowski and her children, Alex, Victoria, and Grace Minakowski; her mother Jacqueline Peddigree, step-father Franklin Peddigree, and father Robert Simmons; her brothers Scott Simmons and Brian Simmons, and sister Cindy Barrett; and her 11 nieces and nephews, and three grand-nephews. A beloved wife, mother, daughter, aunt, and friend, she will be missed by everyone who was lucky enough to meet her with the possible sole exception of the UPS driver who covered her home: he may be relieved. Raised in Maple Glen, PA, Lisa attended Upper Dublin High School, where she excelled in soccer, field hockey, and being popular. While unconfirmed, it is believed that she was voted "Most Likely to Break Her Husband’s Heart in 30 Years". Sadly, this was eerily prescient. She graduated from Pennsylvania State University with a degree in economics in 1995. It was there she met her husband (both freshmen of a sort) in Math 121, college algebra, where she pretended to not understand mathematics while Chris pretended he did. They were nearly inseparable for the next 30 years, had three perfect children (well, more perfect than either of them, at least) and lived happily ever after, until, sadly, this week. This is the part in obituaries where a person's life is catalogued and recited, and it would be easy to tell you about Lisa's summers in Avalon, her scores of friends across the country and spread around the world, her marriage to Chris and how much she adored Alex, Tori, and Grace, and how devoted they are to her; to tell you about their little paradise in San Clemente with views of Seal Rock and Catalina out back and the Santa Ana Mountains out front; to tell you about their move back to Washington, DC; to tell you about her being diagnosed with breast cancer, then again, and yet again; and to tell you about becoming part of a community in Huntingtown. It would be easy, but it wouldn’t tell you at all who Lisa was and just why she was so special to so many people. To know Lisa was to know she was totally without guile or pretense. And, man was she funny, and joyous and generous and beautiful … she was quite simply a pleasure to be around. She made everyone who happened into her orbit better, whether coaching a stranger who stumbled across her blog through a cancer diagnosis, talking on the phone with an old friend in California, or providing the entertainment on a girls’ night. Lisa brought her infectious joy to everything she did, from raising money for various charities, to coaching her kids’ STEM competition teams and stage-managing their theater productions, to the oncology unit at Johns Hopkins, to 39th Street beach (just don’t get in her sun), and to family dinner on a Tuesday. She collected friends from every one of these, and a hundred more, like bits of beautiful sea glass, and she cherished each one uniquely. Of course, everyone has friends, but not quite like Lisa had friends. Maybe this is a little insight as to why: One night many years ago she and Chris were eating at the bar of some fancy restaurant in Philadelphia, and maybe having a few drinks (they were schnockered). Almost certainly bored with Chris’s conversation (probably politics), she started interrogating a fellow sitting a few seats down. Within a few moments she found out his name (Mo), where he was from (Chicago), what he did (coached sports), why he was eating alone (come sit with us!). Chris begged her to leave this poor man alone to eat his carbonara, but she pressed on, got half his life story and bought him another round to toast something or other—30 minutes later they were fast friends, eventually hugging goodbye. Outside, Chris told her she was talking with Maurice Cheeks from the Sixers, to which she simply said, “Oh, that’s cool!” Before they got 100 feet down Walnut Street, she stopped to talk to a man who was panhandling and before long ran into the Wawa to buy him a hotdog and a pack of Marlboro lights. As Chris was trying to finally drag her to the cab, Mo Cheeks left the restaurant and she yelled, “Mo! Mo, come meet my friend!” And he did. Everyone always did for her and they were better for it. That is who she was—that’s who she is. She was a perfect mother, raising three incredible kids, a cherished daughter and sister, but to everyone, she was an amazing friend, especially to her husband, to whom she was the moon and stars, too. Christmas morning will be quieter and less joyful this year, as will every other event where she gathered with family and loved ones and caused a beautiful ruckus. Requiescat in pace. A visitation with her family and memorial service for Lisa will be held at Lee Funeral Home, 8200 Jennifer Ln, Owings, MD on Saturday March, 27 2021, from 11 AM – 2 PM. Her funeral will be held at St. Mary’s Episcopal Church, 9425 Third Ave., Stone Harbor, NJ later in the spring after attendance restrictions are relaxed. In lieu of flowers, memorial donations may be made to the Lisa Anne Minakowski Memorial Scholarship c/o her husband, Christopher Minakowski. NEW GUIDELINES FOR ATTENDING VISITATION / SERVICES. - 100 to 150 people max at any given time in Funeral Home. - Funeral Services in Chapel limited to 100 people with five to six (5 to 6) people per pew. - Masks and social distancing still applies.

The family of Lisa Anne Minakowski created this Life Tributes page to make it easy to share your memories.

Send flowers to the Minakowski family.