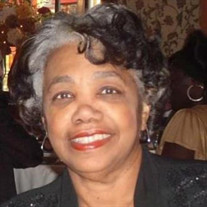 Mae Helen Campbell, or “Helen” as she liked to be called, was born November 24, 1938 to the late Ray Gooding and Mary Alice Currence Gooding in Salisbury, NC. Her parents moved to Washington, DC when she was 2 years old and this is where she was raised. She was the oldest sibling of three brothers. Helen found God at an early age and remained faithful to her Baptist upbringing. She found her church home with Mt. Ennon Baptist Church here in Clinton, Maryland, where she served as a member of the missionary ministry. She believed that her role in life, the reason she lived, was to give back to her community and to help those in need. She said that she would pass on when she achieved all her duties in life. When Helen was a kid, her father told her to get a government job. Following his advice, she graduated high school, went to a business training school and got a government position as a Secretary. She then met Cardell who was in the Navy at the time, invited him to a dance, and from there, she embarked on countless adventures with him. Cardell and his Pigeon “Helen” traveled the world, had children, and eventually settled down in Clinton, Maryland when he retired from the military. The two were often together, kind of like “joined at the hip”. Most of Helen’s activities involved Cardell. She was his true partner. His friends became her friends. When he fished, she did too. When he would go on long drives, she would too. When he wore a hat, she would too. But aside from her partner, Helen had her own activities and interests. She enjoyed going to Bingo, casinos, dancing, games, and various home projects. Helen joined two women’s community organizations, the Women of Distinction (WOD) and the Fleet Reserve Women’s Auxiliary, where they performed various charitable activities such as writing to the military men and women at Christmas, children gift giving and stocking stuffers, military celebratory parades, visiting elder homes and providing volunteer services. When she retired from the government, she enjoyed her leisurely time with hobbies. Her favorites were those scratch offs, bingo, and casinos. Helen was an incredibly lucky woman, to the point that if you were near her, you would find yourself on the hot streak too. To family and friends, Helen was the sweetest, most caring person they knew. She would do anything for those she loved and showed kindness for those in passing. She taught her children and grandchildren to be kind, to be loving, and give everything they got to this world. In her final weeks and days, she actively expressed her love and appreciation for her friends, her family, and her husband. We will continue to live on in her name, seeking our life missions and using our hearts everywhere we go. Helen Campbell was the definition of everything good in this world and inspired so many people she encountered with a gracious heart. She was a saint. She is survived by her husband, Cardell Campbell Jr., her children Cardell (Camilla) Campbell III, Daniel Campbell, and Cynthia (Edmond) Hasty; her grandchildren: Janelle, Tyrell, Amanda, Keith, Bronte, Morgan, Franklin, Jonteal, and Kahlil. Great Grandchildren: Alexa, DeMarche, Elijah, Cash, Cameron, Bre, Lila, and RoisMaire; her siblings, Raymond Gooding and Larry (Jackie) Gooding; and a host of nieces, nephews, and cousins. Her transition from earthly to eternal life reunites her with her mother, father, brother Ronald and daughter Victoria Renee Campbell. Helen you are now at peach and home.

Mae Helen Campbell, or &#8220;Helen&#8221; as she liked to be called, was born November 24, 1938 to the late Ray Gooding and Mary Alice Currence Gooding in Salisbury, NC. Her parents moved to Washington, DC when she was 2 years old and this... View Obituary & Service Information

The family of Mae Helen Campbell created this Life Tributes page to make it easy to share your memories.

Mae Helen Campbell, or “Helen” as she liked to be called, was...

Send flowers to the Campbell family.