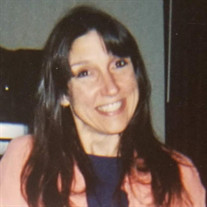 After 16 months has passed, The Celebration of Life for Marcia Hammett Handrick, will be held Saturday, October 9th, 5:30 at the Marlborough Hunt Club. Marcia requested that her family and friends gather for a casual and fun evening at the Hunt Club to include music, food and drinks. Marcia Hammett Handrick, 63 of Huntingtown, Maryland passed away June 19, 2020 at her home with her family at her side. Marcia was born October 31, 1956 in Washington DC, the daughter of Robert and Ann (Buck) Hammett of Upper Marlboro, Maryland. Marcia grew up on the Hammett farm in Upper Marlboro with her brother Stuart and sisters, Elizabeth and Sally. She graduated from Queen Anne School, then earned her degree from Towson University in Maryland. Following in her father’s footsteps with the love of flying, she began her flying adventures early and was soon towing banners up and down the beaches of Ocean City, Maryland during summers of her college years. After earning all of the various aviation FAA ratings she went onto flying sightseeing flights around Arcadia National Park and charter flights for Bar Harbor Airlines in Maine. Marcia was then accepted into the United States Air Force, Pilot Training Program in January 1982. After completion of Officer Training School earning the rank of Second Lieutenant she began the one year Pilot Training Program at Reese AFB in Lubbock Texas, graduating in the spring of 1983. As one of the top graduates in her class she earned the designation of Fighter Pilot Qualified, but at a time women were not flying in combat thus was brought back as an instructor pilot in the Advanced High-Performance T-38 Jet program. After Completion of Instructor Training at Randolph AFB in San Antonio, Texas, Water survival at Homestead AFB, Florida and POW and Survival training at Fairchild AFB, Washington she returned to Reese AFB as a T-38 instructor pilot. Back in Texas Marcia joined Captain Patrick Handrick. With her promotion to First Lieutenant and a year of jetting around the country on weekend fly dates, they were then married in southern Maryland on the Hammett Farm, September 22, 1984. A wedding that included military jets and a saber wedding salute, this event brought together the couple’s three groups of family and friends from Southern Maryland, Northern Wisconsin and the U.S. Air Force that would define their future. After the birth of the first set of twins, Nicholas and Matthew in the summer 1985, Marcia fulfilled her lifelong dream when hired by Delta Airlines in 1987 as only the 7th woman pilot to fly for them. With the birth of third son, Zachary born in June 1990, Marcia decided to travel no more and resigned from Delta Airlines to be at home and entered the business world. She owned and operating two large Pre-Schools from 1990 –2006, with 100 children attending each along with the many teachers and staff required. Her proudest moments were always the end of year Kindergarten graduations at both schools. Very much wanting a daughter Marcia gave birth to her second set of twins, Annie and Samuel in the spring of 1995. She was delighted with 5 as it was her favorite number thus five children, all born five years apart and the last set on, 5-5-95. After 16 years in the childcare business Marcia decided to do what she loved best, work with flowers. She had for many years worked with her church’s alter guild at Trinity Church in Upper Marlboro. Once completing commercial floral design training, she went to work for Bowens Florist in Prince Frederick, MD. After a year of both floral designing and the business operation, in 2011 she purchased the premier flower shop in Prince Frederick MD, Garner & Duff Flowers and Gifts. In her new shop with sons Matthew operating the retail and Zachary designing arrangements at her side along with her crew, all of whom would later become her very good friends, Marcia once again found something she loved to wake up to every day. In late December 2017 Marcia went into full cardiac arrest at home but was resuscitated by her family using a home defibrillator. After 4 days in a coma and a week in cardiac ICU, then getting her own implanted defibrillator she was back on her feet and back to work at her shop by mid Jan. She loved her Maryland seasons, the spring weeks at her beach house “Lifesavor” on Cape Hatteras, short weekend trips to Maine and the summer weeks in northern Wisconsin. In recent years she cherished her trips out west to include her favorite family trip on the classic, Coast Starlight Train, a 10 day train trip up the west coast from LA to Seattle. She also loved her trips to Lake Tahoe Nevada for visits with daughter Annie and adventures with son Samuel in Santa Monica, California. Marcia is survived by her husband Patrick, children Nicholas Hammett Handrick (Chelsea) & grandson Noah Robert Handrick, Matthew Patrick Handrick, Zachary Ryon Handrick, Ann Glennan Handrick and Samuel Bowen Handrick. Marcia’s siblings Stuart Hammett (Lavonne) & niece Gracie, Sally Hammett Bailey (Phillip) & niece Ella, & nephew Blake. She is preceded in death by her parents Robert and Ann Hammett, her sister Elizabeth Smith and brother, Mark Hammett. The family invites, as she wished, friends, family, co-workers and associates to celebrate her life for a fun and casual evening at the Marlborough Hunt Club, Saturday, October 9 at 5:30 5904 Hunt Club Road, Upper Marlboro, MD.

After 16 months has passed, The Celebration of Life for Marcia Hammett Handrick, will be held Saturday, October 9th, 5:30 at the Marlborough Hunt Club. Marcia requested that her family and friends gather for a casual and fun evening at the... View Obituary & Service Information

The family of Marcia Hammett Handrick created this Life Tributes page to make it easy to share your memories.

After 16 months has passed, The Celebration of Life for Marcia...

Send flowers to the Handrick family.