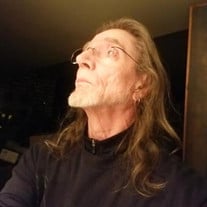 Marco Pasquale DePompa, III, of Huntingtown, MD, passed away on January 9, 2021, at the age of 68. He was born on January 22, 1952 at the Bethesda Naval Hospital and was raised in D.C. by his mother Patricia Hemm DePompa. “Ricky,” a childhood nickname, was the consummate overachiever as an Eagle Scout, musician, artist, scientist, mathematician, photographer and experimental archeologist. His later years were spent fossil hunting, making arrowheads, stone tools and cataloging his discoveries. His affinity for Native American culture and the great outdoors were not only a passion but a way of life. As the older brother, Marco inspired his siblings to respect the earth, fellow beings, be helpful and kind, tell the truth and take responsibility for your actions. He attended St. Johns College High School and was accepted by presidential appointment, as the top 3% in the country, to the U.S. Naval Academy. His quest for higher learning took him through the University of Maryland, Xavier University as well as the College of Southern Maryland. Marco was a passive soul, always an ally to the underdog and downtrodden gifted by a great wit and humor to both ease a stranger and elevate a friend. Marco was a scholar, teacher, artist, mentor, brother and great sounding board. One of his greatest joys was to mentor and to inspire people, as a lesson learned from his stepdad, Mr. Turgeon. Inspiring those to think and learn, and seeing the light go on for children, he thought to be one of his greatest accomplishments. Marco is survived by his wife Annetta, brothers Mike, Joe, sister Mary and extended family. He was preceded in death by his brother Matthew Charles. “All the times that I've cried Keeping all the things I knew inside It's hard, but it's harder to ignore it If they were right, I'd agree But it's them they know, not me Now there's a way And I know that I have to go away I know I have to go … ” A Memorial Gathering will be held at Lee Funeral Home Calvert, 8200 Jennifer Lane, Owings, MD 20736 on Friday, January 22nd from 2 to 4 pm. Burial will be private. Marco loved to inspire joy and charity so anything you do to make yourself or people happy (especially children) would be great! He would take joy in knowing he inspired it... He especially liked to help people find joy in nature! In lieu of flowers donations may be made to: Johns Hopkins University Hospital, 1800 Orleans Street, Baltimore, MD 21287 - giving.jhu.edu Calvert Hospice, P.O. Box 838, Prince Frederick, MD 20678 - calverthospice.org American Cancer Society, P.O. Box 22718, Oklahoma City, OK 73123-1718 - donate3.cancer.org NEW GUIDELINES FOR ATTENDING VISITATION / SERVICES. - 50 to 75 people max at any given time in Funeral Home. - Limit visitation to 15 minutes in visitation room to allow for others to express their condolences. - Funeral Services in Chapel limited to 70 people with four (4) people per pew. - Masks and six foot social distancing still applies

The family of Marco Pasquale DePompa, III created this Life Tributes page to make it easy to share your memories.