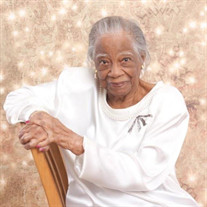 Margaret Alice Bond Williams peacefully departed on October 9, 2020. Margaret was born on July 28, 1918 to the late John and Irene Bond. Margaret was raised in Churchville, MD and graduated from Havre de Grace High School in Harford County, MD in 1939. She was a loving sister to her late sibling Helen Stansbury. After graduating from high school, Margaret followed her passion and pursued a secondary education in Cosmetology. She received her diploma from the APEX College of Beauty Culture and Hairdressing founded by Madame Sara Spencer Washington in 1941 after which she began working as a Cosmetologist. Margaret met and married the late Lawrence Williams who was stationed at Aberdeen Proving Grounds. When he finished his military service they moved to his hometown of Charleston, WV where their two sons, Lawrence (Eddie) and Douglas (Dougie) and one daughter Jacqueline (Jackie) were born. All three of her children grew up and moved to the Washington, DC Metropolitan area and once her husband’s mother passed away, she joined them. Margaret became an official resident of Maryland, a beloved resident of Branchwood Towers in Clinton, MD and she joined Ebenezer AME Church in Fort Washington, MD where she has been a faithful member for the past two decades. Margaret enjoyed traveling and liked to send postcards from wherever she visited. She has traveled to many different states and enjoyed various cruises. She also enjoyed good food and a favorite hobby of hers was creating ceramic art. Voting was also very important to Margaret. She was born in the year that women were given the right to vote and she continued exercising that powerful right 100 years later. Margaret was fiercely independent and insisted on living life on her own terms. Margaret will always be in our hearts. She is survived by her daughter: Jacqueline Correll, Clinton, MD, grandchildren: Sherry Douglas, Carmen Correll, Rise’ Correll-Battle, Claude Correll, Adrian Lacey, Tina Williams-Shepherd, and Tiffany Williams. In addition, Margaret has 11 great grandchildren and 2 great great grandchildren. She also leaves behind a host of nieces, nephews, cousins and friends who will miss her smile and laughter. Now the Lord has called for his daughter, a mom, a grandmother, a loved one, to be by his side and to continue her service with Him. Don’t be sad, but rejoice in knowing that she is one of God’s angels now.

The family of Margaret Williams created this Life Tributes page to make it easy to share your memories.