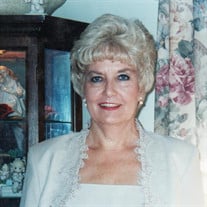 Margie Ann Edwards-Morgan, of Upper Marlboro, MD passed on August 18, 2020 at the age of 85 years. She is celebrating her new life, in reunion with many family members and friends that she has deeply missed. Born in Washington, DC Margie was the daughter of Mary Elizabeth and John Brook Jameson. She graduated from St. Dominic’s Catholic High School in SW Washington, DC. Her early years immersed her into the Catholic faith. At the young age of 17, Margie met Billy. Very much in love, they married in 1957 at St. Peter’s Catholic Church and eventually brought their four, beautiful children into the world. In 1977, Billy was suddenly taken from their family. Margie turned to God and relied on her faith to carry her through this first difficult loss in her life. She worked at the Washington Star as a Data Processing Supervisor. There she was a bright light in her community. She loved to laugh, joke, dance and get together with many, that became lifelong friends. She was one of those special people who just drew others to her. God’s Plan brought Margie and George together. They had met as teenagers and their paths crossed later in life as they discovered that they had each lost their spouse. They spent nearly 40 years together officially tying the knot 1999. As a mother, Margie had endless love for her children. In 1986, her second child Ricky tragically died and in 1996, her first son Billy was also suddenly taken from her life. After a heartbreaking physical and mental decline for over 10 years, Alzheimer’s finally claimed this beautiful life. Margie will be remembered with special memories we each hold onto. She would not want to extinguish that glimmer of mischievousness that could make her family and friends smile. The kindness, compassion and generosity she has shown over the years will remain as her family and friends mourn her passing and celebrate her life. Beloved wife of George O. Morgan; Devoted mother of Michael Lyn Edwards of Upper Marlboro, MD, Marcie Ann Powell and her husband Donnie of Chesapeake Beach, MD and the late Billy Kline Edwards, Jr. and the late Ricky Allen Edwards; Loving sister of Patricia Ann Martin of North Beach, MD, Rose Ann Windsor of Brandywine, MD and the late Samuel, Joe, Eddie and John Jameson; Dearest Grandma of Shannon Marie, Billy Kline III, Heather Marie, Dominic Paul, Victor Giovanni, Donovan Marcello and Julianna Rose. Also survived by 7 great-grandchildren. For those desiring, contributions in memory of Margie may be directed to Alzheimer’s Association, 225 N. Michigan Ave. Floor 17 Chicago, IL 60601. NEW GUIDELINES FOR ATTENDING VISITATION / SERVICES. - 50 to 75 people max at any given time in Funeral Home. - Limit visitation to 15 minutes in visitation room to allow for others to express their condolences. - Funeral Services in Chapel limited to 70 people with four (4) people per pew. - Masks and six foot social distancing still applies.

Margie Ann Edwards-Morgan, of Upper Marlboro, MD passed on August 18, 2020 at the age of 85 years. She is celebrating her new life, in reunion with many family members and friends that she has deeply missed. Born in Washington, DC Margie was... View Obituary & Service Information

The family of Margie Ann Edwards-Morgan created this Life Tributes page to make it easy to share your memories.

Send flowers to the Edwards-Morgan family.