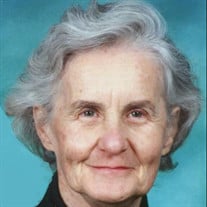 Martha Jean Talbert died peacefully on Wednesday evening, December 8, 2021. She was always known simply as Jean, and didn’t really like her first name. She was born in Charlotte, NC on November 3, 1929 to Lavinia and Fred Matheson. Her parents divorced and Jean moved to Washington, D.C. with her mother and older brother Fred Matheson, Jr., who was known as “Buster”. They lived in an apartment at 316 East Capitol Street. Jean and her brother Buster were very close and frequently played together in the nearby U.S. Capitol building and the Folger Library. During World War II, Jean’s family moved to Boulevard Heights, MD, just a few blocks from the volunteer firehouse. It was there, after the war, that she met her life-long love, Victor “Buddy” Talbert. He had returned from serving in the Navy and was a volunteer fireman. They were married at the St. Francis Xavier Catholic Church in Southeast D.C. on November 12, 1947. Unable to afford their own house, they lived in rented rooms in Boulevard Heights. One of those rooms was with an Italian family. This is where Jean learned to cook her famous spaghetti sauce, which was enjoyed for decades by family and friends. Their first child, Vickie Jeanne was born on March 1, 1950. Soon they were able to buy their own home on Byers Street one block behind the Boulevard Heights firehouse. A son, James Curtis was born on May 24, 1955. During their early years, Buddy worked at a lumber mill and then worked for the Potomac Electric Power Company in D.C for the next 40 years. During his time off, he continued serving as a volunteer fireman, rising through the ranks to become Chief in 1959. He was decorated for heroism and received the “Fireman of the Year” honors for 1960 by the Maryland State Firemen’s Association. Jean loved to recount the stories of how Buddy would take Jimmy to the firehouse, and what would happen when there was a call. Buddy would scoop up his little boy and run towards home. Meanwhile, Jean would hear the fire whistle, drop whatever she was doing, and run towards the firehouse. They’d meet in the middle. Then Buddy would pass Jimmy to Jean and return to the firehouse to answer the call. Jean also told the story of when Vickie hid a toy in her Daddy’s fireman boots, and how Buddy would be shocked to find them in the middle of the night when he heard the whistle summoning him to a call, jumped out of bed and into his boots. In 1962, they moved to a new home on Veltri Drive in Oxon Hill. The family would live there for over 30 years. During these years, Jean and the family were members of the Broadview Baptist Church. Jean served many years as a Sunday School teacher, deepened her Christian faith and made many life-long friends. She made an extremely comfortable home for her family. She was well versed in all the classic home-making skills; cooking, sewing, dressmaking, embroidery, cleaning, and rearing two children. She certainly would have earned “The Good Housekeeping Seal of Approval”. Jean also cared for her aging mother, Lavinia Sawyer for many years after her step-father’s death. In time, Vickie and Jim grew up, went out on their own to enjoy careers and start their own families. But they didn’t move so far away that they couldn’t frequently return home for a great meal, holiday celebration, or Jean’s tender love and sage advice. She cared for her first grandson, Sean, nurturing him from birth to elementary school. After Buddy retired, he and Jean planned and built their “dream home” in Waldorf, MD. Here they both had more time to do the things they enjoyed the most; creating a comfortable home, a beautiful yard, hosting friends and family for holiday feasts, and making more friends in their new church home. She had three grandsons; Sean Tierney, Daniel Talbert and Brian Talbert. She was a voracious reader, mostly mysteries and poetry, and was never without a book within reach. She said she had read the entire Bible, cover to cover, at least three times. She left behind quite a few books but most books were shared with others. She was thrifty, as were many who grew up during the depression, and loved going to used book stores. Her Bible and other inspirational books contained many small handwritten notes with verses she found helpful in her daily life. In May 2015, after many battles with cancer, Buddy finally succumbed to the disease. Jean deeply missed her steadfast partner of 67 ½ years, but gradually built the next phase of her life. She moved to an apartment in Herndon, VA near her son. She was 86 then and it was the first time in her life she had ever lived alone. This was challenging for her, but because of her kind and caring nature, she developed many new friends. She participated in Bible study and exercise groups. She was kept company by her collection of animated stuffed animals that danced and sang. During her last seven years she persevered through many injuries and illnesses. She rarely complained and when she did, it was for good reason, and it was something she had worried about privately for a long time. Some of her maladies were things she had neglected for years because she was too busy caring for others. Throughout she always maintained her sweet, pleasant attitude and her faith in God. She will be deeply missed year-round, but especially at Christmas. Jean always made Christmas very special for everyone with thoughtful gifts, good food and tasty desserts.

Martha Jean Talbert died peacefully on Wednesday evening, December 8, 2021. She was always known simply as Jean, and didn&#8217;t really like her first name. She was born in Charlotte, NC on November 3, 1929 to Lavinia and Fred Matheson.... View Obituary & Service Information

The family of Martha Jean Talbert created this Life Tributes page to make it easy to share your memories.

Send flowers to the Talbert family.