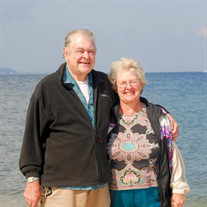 Mary Harmon was born on December 22, 1941 to Harry and Annie Jones in Seat Pleasant, Maryland. She was the middle of five children: Alice, Patricia, Harry, Jr., and Anne. Growing up in Upper Marlboro, Maryland, she went to Frederick Sasscer High School. A blue-eyed beauty with a ready smile, she was a self-described tomboy. She loved God, children, animals, and nature. A hard worker, she pumped gas and cleaned windshields at her father’s gas station. This is how she met her future husband and love of her life, Bill Harmon. He stopped at their gas station on his way to work in Greenbelt and they soon were dating. After high school, she went to work for the Central Intelligence Agency, not as an agent, but as an administrative assistant. For her skill with a typewriter, she earned a coveted spot in the headquarters typist pool producing letters for executive leaders, and, in one instance, the President of the United States. But a career in the Agency was not what God had in store for Mary. Her romance with Bill, a black-haired, green-eyed NASA technician became serious and they married in 1960. They first lived in an apartment in Riverdale, then moved to Croom for more space and to be closer to family. By the time they purchased their first home in the small town of Brandywine, they had three of their children, Wendy, Michael, and Richard. Mary worked hard around the home, caring for her growing family, raising dogs to supplement their income, and baby-sitting. Her love of animals led to her raising quite the menagerie including chickens, geese, turkey, goats, peacocks, pigeons, rabbits, a pony, and a Saint Bernard. She volunteered time at the elementary school and even brought animals to the school for children to pet. To this day, some of those children remember her kindness from long ago. Bill and Mary’s family continued to grow with the additions of David and Bill. With four boys spread across thirteen years, Mary had her hands full, especially entering the high school years. As her children grew into adults, and started their own lives, Bill retired from Federal service, but their work was only beginning. They moved to Hughesville and, Bill and Mary became active in several church ministries to include assisting ministers from Kenya, Nairobi, and India in gathering support from many local churches in the region. They were happy to play a role in bringing God’s Word in Africa and the Indian subcontinent; and they accomplished it without leaving the National Capital Region. Dedicated to serving, they devoted a lot of time and energy caring for elderly family members including Mary’s mother. During this period, they welcomed grandchildren into the family; and, of course, Mary adored them. Her grandchildren are Nathan, Nanette, Jackie, Matthew, and Naomae. She found much joy simply when they called her by her favorite name “Grandma”; she simply could not get enough time with them. As was their way, Bill and Mary spent all their time together in their twilight years. In September 2021, after more than sixty years of devoted married life, Bill and Mary were called home to the Lord. They will be laid to rest together at 1:45 PM on Tuesday, October 19, 2021 at Cheltenham Veteran’s Cemetery, 11301 Crain Hwy, Cheltenham, Maryland, 20623.

Mary Harmon was born on December 22, 1941 to Harry and Annie Jones in Seat Pleasant, Maryland. She was the middle of five children: Alice, Patricia, Harry, Jr., and Anne. Growing up in Upper Marlboro, Maryland, she went to Frederick Sasscer... View Obituary & Service Information

The family of Mary Harmon created this Life Tributes page to make it easy to share your memories.

Send flowers to the Harmon family.