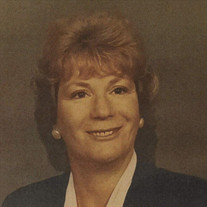 Mary Lynn McManamen of Mitchellville, Maryland passed away on October 12, 2021 at the age of 80. She was born in Washington DC, on February 13, 1941 to John and Margaret Poetzman. She graduated from St. Anthony’s High School in 1959, where she met her first husband of 33 years, William Edward Aiken. Lynn lived in Upper Marlboro, Maryland, where she worked hard raising her children and doing daycare for other children until she became parish secretary for Trinity Episcopal Church in Upper Marlboro for many years before her retirement. In addition, she managed the Meals on Wheels program for over 30 years, until it was discontinued in Prince George's County. It was through the Meals on Wheels program that she met and ultimately fell in love with her husband of 25 years, Paul McManamen, who volunteered to deliver meals. In 2018, Lynn and Paul moved into Collington Retirement Community in Mitchellville, Maryland. Lynn was a member of St. Mary of the Assumption Parish in Upper Marlboro Maryland and a member of the Knights of Columbus Ladies’ Auxiliary, where she participated in a myriad of charitable events, including feeding the homeless, hosting a picnic for the blind and other fundraising activities. She also volunteered at the White House opening children’s mail. In 2007, Lynn and her husband Paul received “Volunteer of the Year Award,” presented by First Lady Laura Bush. In addition, Lynn took great pleasure welcoming her extended family and friends into her home if they needed a place to stay, hosting holiday meals, as well as an Annual Crab Feast for 50 years, which pleased many generations of family and friends each year. She was also an avid Redskins fan and season ticket holder since the early 1960s. Lynn McManamen was preceded in death by her first husband, William Edward Aiken; her parents, John and Margaret Poetzman; her brother, John Poetzman; her sister, Elizabeth Shepherd; her sister-in-law, Sr. Florence McManamen and many loved nieces and nephews. She is survived by her loving husband, Paul McManamen; her son and daughter-in-law, Marty and Sharon; son Gary; daughter, Margaret (Meg) Gordon; grandchildren Alyson and Julia Aiken; great-granddaughter Lillianna Breeden and many nieces and nephews. Due to her kind, generous and selfless nature, Lynn left a touch of joy, hope and a piece of herself with anyone who crossed her path. She will be missed dearly. Contributions may be made in her memory to The American Diabetes Association https://donations.diabetes.org/site/Donation2 American Parkinson Disease Association https://www.apdaparkinson.org/memorial-tribute-1907d3l/ A visitation will be held at St. Mary of the Assumption Catholic Church, 14908 Main Street, Upper Marlboro, Maryland 20772, on Wednesday, October 20, 2021, from 9:30 a.m. until time of the rosary at 11:30 a.m. Mass of Christian burial will be offered directly following at 12 noon.

Mary Lynn McManamen of Mitchellville, Maryland passed away on October 12, 2021 at the age of 80. She was born in Washington DC, on February 13, 1941 to John and Margaret Poetzman. She graduated from St. Anthony&#8217;s High School in 1959,... View Obituary & Service Information

The family of Mary Lynn Aiken McManamen created this Life Tributes page to make it easy to share your memories.

Mary Lynn McManamen of Mitchellville, Maryland passed away on...