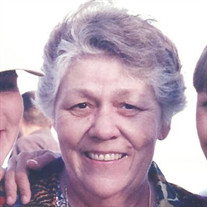 Mary “Lee” [Garner] Vann of Saint Leonard, MD, passed away on Monday, November 30, 2020, at the age of 78. She was born on February 4, 1942, in Washington, DC, to Bernadette [Lange] and William Garner. Lee was married to Robert Vann for 52 years, was the mother of three daughters, and the rare person who lived life on her own terms. Lee grew up in Washington, DC and attended St. Cecelia’s Academy. Like her mother, Bernadette, Lee graduated from Georgetown University. After marrying her husband Robert, she left life on the Hill to live near the water, start a family, and raise three daughters. During her long career as a radiographer, Lee worked for DC General and the Bowie Health Center. Physicians frequently sought her advice when making a difficult diagnosis. Lee was a fan of action movies, and mystery and horror literature. Her favorite author was Stephen King. Frequently, at home or at work she would often retell the story of a book or movie she was enjoying. She always promised to not accidentally reveal the ending but in her excitement she usually did. Living life on her own terms provided Lee privileged moments with her children and grandchildren which was one of her favorite activities. In these moments she had a unique ability to block out the cares of the world and live in the present moment. Shortly after her first grandchild was born she became “Mammy” and went by this term of endearment for the rest of her life. Mary Lee was preceded in death by her parents, Bernadette Jenkins and William Francis Garner, and her daughter Laura Vann. She is survived by her husband Robert; her sister Anne Brophy (Joseph); her daughter Bridget Gorman (William); her daughter Jacqueline Getgen (Jason); and six grandchildren Bernadette, William, Madeline, Margaret, Sarah, and Katherine. The family welcomes donations to Calvert Hospice (CalvertHospice.org) as an expression of sympathy. ALL SERVICES ARE PRIVATE AT THE CONVENIENCE OF THE FAMILY.

The family of Mary "Lee" Vann created this Life Tributes page to make it easy to share your memories.

Send flowers to the Vann family.