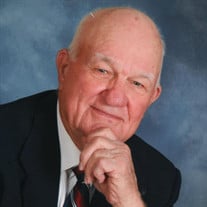 Melvin Robert Anderson, “GUMP”, 89, passed away on Sunday, June 27, 2021 at home after a long and beautiful life. A beloved husband to the late Ellen Louise Anderson, who were married for 49 years, father of Robert Allen Anderson and daughter Robyn Renee Murray. He was a grandfather of six, Brooke Ellen Yeater, Drew Allen Anderson, Lauren Casey Anderson, Nicole Elise Masengale, Steven Samuel Murray, and Casey Alexandra Murray; he was also a much loved great-grandfather to Riley Elizabeth Masengale, Carter Thomas Masengale, Landon Robert Yeater and Blake Aston Yeater. Bob lived an “iconic” life punctuated by a storied athletic career at Bladensburg High School, and a 49 year career with Coca-Cola, where he ascended to leadership positions after having been successful at every position on the ladder that lead to becoming General Manager of Washington Coca-Cola. He was a pillar of the community, a lifelong member of the Fireman’s Association, Chief of Station 39 in Bowie, a member emeritus of Woodmore Country Club, (where he enjoyed his favorite passion of playing golf with friends and his son) a long time board member and past president of Melwood, an organization that advocates for and empowers individuals with disabilities and a member of Huntingtown United Methodist Church. Bob lived a life that deeply touched everyone he knew for the better, with life lessons and endless and unwavering lifelong support for his family, his community and all of the friends that entered his life during his 89 year journey. Family invites friends to Lee Funeral Home Calvert, 8200 Jennifer Lane, Owings, MD 20736, on Wednesday, July 7 from 11:00 am until start of Funeral Services at 1:00 pm. In lieu of flowers please send donations to the following: www.melwood.org.

Melvin Robert Anderson, &#8220;GUMP&#8221;, 89, passed away on Sunday, June 27, 2021 at home after a long and beautiful life. A beloved husband to the late Ellen Louise Anderson, who were married for 49 years, father of Robert Allen Anderson... View Obituary & Service Information

The family of Melvin R. Anderson created this Life Tributes page to make it easy to share your memories.