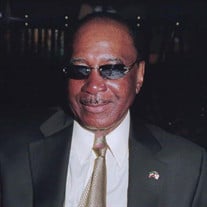 Melvin Herold Blagmon, Sr. departed this life on Friday, August 28, 2020. He was loved by all and admired by many. Melvin was a husband, father, grandfather, great-grandfather, uncle, brother, friend and an inspiration to all those who knew him. He was born on July 7, 1934 in Washington, DC to his late father, Smith Allen Blagmon and late mother, Mary Elton Virginia [Williams] Blagmon. Melvin was the oldest of six children which consisted of his late brother, Willie, late sister, Virginia (Sissy), sister Barbara (Peggy), late brother Bernard and late younger brother, Leon (Lee). Melvin also had half brothers on his Dad's side. Most of Melvin's childhood years were spent growing up in the country setting in Tappahannock, Virginia. He went to school in the country and attended church as well. He was a Christian and he was very familiar with the Bible. He also loved nature and being outdoors. As he approached adulthood, he then decided to leave Tappahannock, VA to pursue a job at a concrete truck driving company in MD following in his father's footsteps as his father was a truck driver for many years as well. Melvin spent most of his adulthood living in Washington, DC where he soon met his wife, Phyllis Ida Blagmon. They fell in love and their union produced four beautiful children: Monica, Jacqueline (Jackie), Crystal and Melvin Jr. Melvin's wife Phyllis later became ill with a kidney disease and passed away. Melvin remarried later on to Gloria Blagmon and their union produced a son, Tommy Blagmon. Melvin took good care of his children and he was always very family oriented. Once his children reached adulthood they each produced children of their own within their unions with their companions. His grandchildren: Jalente, Amanda, Malitta, Tyrell, Tristan, Jacinda, Marina, Mariana, Manrique, Alexi's, Ikea, Christopher, Caiden and Tierney. Melvin loved all of his grandchildren dearly but he was very fond of Malitta, his first grandchild as they were inseparable. Melvin lived a long and prosperous life. Even at the age of 86, he was very independent. He was such a loving and generous person. He even received a recognition award for donating to The National Law Enforcement Officer Memorial Fund. He also served his country for he was a U.S. Veteran. His whole life was centered around helping his family and friends as well as spending time with them as he enjoyed that the most in life. Melvin lived a full life and he cherished each and every moment with the people he loved. He was a rarity and a bright spark in this world. He was the most selfless person you will ever meet. He will be greatly missed by so many including his sister, half brothers, five children, 14 grandchildren, four great-grandchildren, nieces, nephews, sister-in-laws, brother-in-laws, cousins and his many friends. For he was our angel here on earth.

Melvin Herold Blagmon, Sr. departed this life on Friday, August 28, 2020. He was loved by all and admired by many. Melvin was a husband, father, grandfather, great-grandfather, uncle, brother, friend and an inspiration to all those who knew... View Obituary & Service Information

The family of Melvin Herold Blagmon Sr. created this Life Tributes page to make it easy to share your memories.

Send flowers to the Blagmon family.