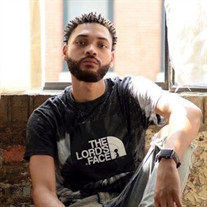 Mr. Duke's Celebration of Life will be streamed and viewed at - https://us02web.zoom.us/j/74779203599?pwd=bVE5RmtvdW5DWU5GSUdlUGVqdC85Zz09 Meeting ID: 747 7920 3599 Passcode: 403055 The world welcomed Michael Tyree Duke into the lives of Jason Duke and LaTonya (Duke) Turpin on September 8, 1997. Michael was the first grandchild for both set of grandparents and immediately stole their hearts and became the pride and joy of all. He was raised with a true belief in God instilled by his parents and raised in the family home church, Zion Church at Lottsburg, Virginia and Kingdom Baptist in Waldorf, Maryland. His love of God was the foundation of his kind, gentle, and serving spirit. Always smiling, bright and captivating, his infectious laugh would fill a room, bringing all to a place of joy. Michael had such a magnetic personality and his ability to foster meaningful relationships carried over to his professional life. He practiced servant leadership at such a young age and naturally gravitated to serving people in a customer service environment. Michael graduated from North Point High School in Waldorf, MD, Class of 2015 and attended the College of Southern Maryland. Michael was blessed with special artistic gifts. His parents recognized early on that he had the ability to recreate anything he saw by simply freehand drawing it and did so with great skill. This gift and love for all things “art” became the springboard for his colorful and inspiring paintings. The love between Michael and his mother LaTonya was immeasurable. It was the kind of love that could not be expressed with mere words. He was her heartbeat and a part of her every breath. No one was a bigger fan of him and his art. This bond was illustrated every time he signed a piece of art as “M27”, his mother’s birthday. He was fortunate to have the love of his biological father (Jason) and his bonus father (Mike) as the family never believed in the concept of “step-relatives”. Along with his mother, grandparents, a village of aunts, uncles, cousins, and extended family, raised a remarkable, decent, loving, and unforgettable young man. His art was therapeutic after the loss of his maternal grandmother which ignited his passion and drove him to reach for new levels. Aspiring to one day become an art professor, he continued to master his artistry skills, making a name for himself in local and national art circles. Mikey Luvv, as he was known, showcased his talent at local studios, retail establishments and on social media platforms. His art was also celebrated in an online magazine publication when he was just 19 years of age. His growing following led many to recognize his gifts and talents, spurring some to add his pieces to their art collections across the country. Seeing the impact of his work on others expanded Michael’s vision. He dreamed of becoming a household name. With a new vision in mind, he rebranded Mikey Luvv to Mikey Angelo, similar to the great Italian artist Michelangelo. This re-brand developed into an aspiring business in art. Michael and his brother BJ, were starting an art company featuring his many creative art forms. It was to be named Arte Dell’Amore, Italian for “art of love”. On Monday, November 16, 2020, Michael went from labor to reward. He was preceded in death by his grandmother, Joyce Jones, and his father, Jason Duke. He is survived by his parents, Michael and LaTonya Turpin; grandparents, Joshua Jones (Phyllis), James and Roceal Duke; great-grandfather, Raymond Jones, Sr., siblings Andre, Brandon, Roneyce Turpin and Brandon Wright; aunt Courtney Foster; nieces and nephews, Elijah, Josiah, Sariah, Janiyah, Joseph, and Jaleiyah; very special sister-cousins, Brya Bridges, Diasia Fisher, Jakeva Settles a brother-cousin Michael Fisher; very special friend, Serene Baker; best friends Phillip Moten, John Dee and Devon Gutrick; and a host of other relatives and friends.

The family of Michael Tyree Duke created this Life Tributes page to make it easy to share your memories.

Mr. Duke&#39;s Celebration of Life will be streamed and viewed at...

Send flowers to the Duke family.