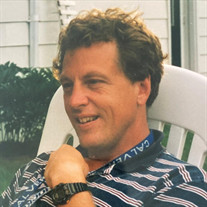 Michael “Mike” John Linsenbigler, age 65, passed away from cardiac arrest while doing what he loved, riding his bicycle on May 11, 2021. Mike was born on June 4, 1955 in Quakertown, PA to John and Stella Linsenbigler, was raised there with his sister, Patricia and graduated from Quakertown High School in 1973. Mike continued his education at his beloved Penn State University, graduating in 1977 with a degree in Environmental Resource Management. Mike started his career with the Federal Government as a soil conservationist in Chester, Montana. He continued his career in the Federal Government in Washington DC, retiring as the Director of the Conservation Reserve Program for Farm Services Agency USDA in 2011. After retiring from government service, Mike continued his career as an independent contractor. Though Mike’s work accomplishments were many, most important to Mike was his family and friends. He found most joy in being a husband to the love of his life, Elaine, to whom he was married for over 41 years, his two beautiful daughters and three cherished grandchildren. Mike lived in Chesapeake Beach MD for over 35 years, making friends with all he met. Mike loved to be active, riding his bike, running, playing pickleball, body surfing and enjoying everything on the water. Mike was on countless civic committees, always giving back. Mike’s compassion and kindness for all was reciprocated with great love from his family and friends. He will be missed beyond words and his memory will live on forever. Mike is survived by his loving wife, Elaine; his daughters Meriel Linsenbigler and Hilary Linsenbigler; his grandchildren Luke, Wesley and Stella Couture; his sister Patricia Hess and a host of other family and friends. A “Be Like Mike” Memorial will be held this summer to honor Mike at the North Beach Fire Hall (8536 Bayside Rd, Chesapeake Beach, Md 20732) on Saturday, July 24th from 2 to 10 pm. In lieu of flowers the family is suggesting donations be made in Mike’s memory to The Nature Conservancy.

Michael &#8220;Mike&#8221; John Linsenbigler, age 65, passed away from cardiac arrest while doing what he loved, riding his bicycle on May 11, 2021. Mike was born on June 4, 1955 in Quakertown, PA to John and Stella Linsenbigler, was raised... View Obituary & Service Information

The family of Michael John Linsenbigler created this Life Tributes page to make it easy to share your memories.

Send flowers to the Linsenbigler family.