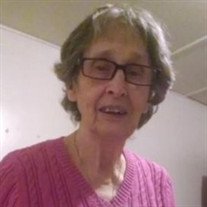 Minnie Louise Bornman was born on July 1931 to the late Macie Lawson and the late Dewey Sorrells of Rutherfordton, North Carolina. Louise had two brothers, the late Charles Lawson, Sr, and the late Franklin Sorrells. As a young girl the family moved to Washington, DC, where she attended Central High School. She played basketball and was on the swim team, graduating in 1950. On June 8, 1951, Louise married the love of her life, the late Donald Bornman, a member of the United States Air Force, which took them all over the world. With each new base there was a new child born into the family, giving them Donna Bornman, Lester Bornman (Judy), Gloria Lowe (Mike), and Kellie Bornman. She was preceded in death by one grandchild, Michele Dariano. The remaining grandchildren are AJ (Michele's husband), Austin Bornman, Royal Pruter (Kevin), Krystal Brooks (Jason), Christopher Lowe, Christina Crews (Bishme), and Paul Bornman. 13 grandchildren and 1 great great grandchild. Louise was a stay at home mom, but she was more than mom to just her own kids. She was a second mom to others. Her home had an open-door policy and all were welcome. Over the years she was known to have watched dozens of children, helping others, and providing love and care as she did with her own family. Louise loved to pass on her cooking skills and to this day, many she taught cooking to still use her recipes. She is known to many as Mrs. B, mom 2, or Aunt Louise. Louise was an active member at the Boulevard Heights Volunteer Fire Department, in Prince George's County, Maryland, for over 50 years. There she held many positions in the Ladies Auxiliary. On the county level she was awarded the Hall of Fame status in the 1980's and served on several committees in the department. One of the things she enjoyed most was the fire department hook-up computations during the county convention. In her later years she took the role of grandmother/great grandmother very seriously and loved them fiercely. She also loved to show off her green thumb with many flowers, making her yard very beautiful and colorful. In 2017 she and two of her children decided to move to a warmer climate, making Florida their new home. She could then relax in the sunshine, with no worries about snow or cold temperatures, making life easier and more enjoyable until the time of her passing. Burial at Maryland Veterans Cemetery - Cheltenham will take place on Thursday, April 22, at 11:15AM.

Minnie Louise Bornman was born on July 1931 to the late Macie Lawson and the late Dewey Sorrells of Rutherfordton, North Carolina. Louise had two brothers, the late Charles Lawson, Sr, and the late Franklin Sorrells. As a young girl the family... View Obituary & Service Information

The family of Minnie Louise Bornman created this Life Tributes page to make it easy to share your memories.

Minnie Louise Bornman was born on July 1931 to the late Macie...

Send flowers to the Bornman family.