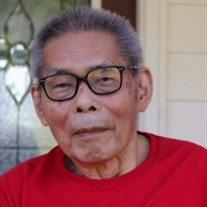 Nehemiah Alvarez Cartalla, of Prospect, Va., passed away on Friday., Jan. 1, 2021, of Parkinson’s. He was born on November 27, 1933 in Oroquieta City, Misamis Occidental, Philippines. He is preceded in death by his first wife, Jimequieta B. Cartalla, and his sister, Hellen C. Caballero. He is survived by his second wife Alith Revil , of Toronto, Canada; and his sister Caroline Duyongco of Davao City, Philippines.; Children: Lillian Russell (Tim) of Derwood, MD, Rosemary Lehman (John) of Prospect, VA and David Cartalla (Scott) of Oakland, CA. Grandchildren: James Lehman, David Lehman, Noah Lehman, Brendan Russell and Sean Russell, in addition to several nieces and nephews. Nehemiah is a retired military veteran, having served in the U.S. Navy for 20 years. After his retirement from the Navy, he worked for another 20 years at various positions with the federal government at the Pentagon and the U.S Department of Housing and Urban Development in Washington, D.C. until his retirement in 1995. Nehemiah and his wife, Jimequieta, resided for many years in Bryans Road, MD where they raised their three children. He was married for 27 years until his wife’s death in 1995. He subsequently remarried in 1996 and spent his last few years with and under the loving care of his daughter Rosemary Lehman and her family in Prospect, VA. A private family service will be held at Cheltenham Veteran’s Cemetary on Wednesday, January 20, 2021.

Nehemiah Alvarez Cartalla, of Prospect, Va., passed away on Friday., Jan. 1, 2021, of Parkinson&#8217;s. He was born on November 27, 1933 in Oroquieta City, Misamis Occidental, Philippines. He is preceded in death by his first wife, Jimequieta... View Obituary & Service Information

The family of Nehemiah A. Cartalla created this Life Tributes page to make it easy to share your memories.

Nehemiah Alvarez Cartalla, of Prospect, Va., passed away on Friday.,...

Send flowers to the Cartalla family.