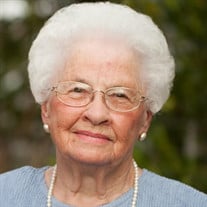 Peggy Ruth Sneade, 91, was born on January 16, 1930 to the late William Roosevelt McGinnis and Delola Emma McGinnis in Williamson, West Virginia. Surrounded by her family at home, she passed peacefully into God’s presence on April 9, 2021. Beloved wife of the late Wilson Maurice Sneade; Loving mother to four children, son Mike Sneade and his wife Sandy, daughter Benita Sneade, son Dave Sneade and his wife Lynne, and daughter Cheryl Hirschman and her husband Dave. Peggy is also survived by 2 sisters, Marjorie Bollman and Shirley Morrison and her husband Danny, eight grandchildren, grandson Rick Sneade and his wife Krysten, granddaughter Kim Shifflett and her husband Ernie, granddaughter Karen Kirk and her husband Mark, grandson Tim Hirschman and his wife Ashlie, granddaughter Jen Chapmon and her husband Josh, grandson Jason Sneade and his wife Kristen, granddaughter Dana Banyasz and her husband Ben, granddaughter Kelsey Cohen and her husband Adam; great-grandchildren Jake and Ben Shifflett, Addison, Aiden and Avery Kirk, Judah Chapmon, Summer and Joey Sneade, and Sydney, Brantley and Easton Banyasz. In addition to her husband, she was predeceased by her granddaughter Marcy Sneade and great-grandson Landon Sneade. Peggy is also predeceased by her siblings; brother Bill and sister Mary Francis. Peggy lived on a working farm in East Rainelle, West Virginia for a short time, moving to Baltimore City at the age of 10. She attended and graduated from Eastern High School, Baltimore, Maryland. She met her devoted husband, Wilson Sneade, while attending a church sponsored event. They fell in love, married in 1949 and began a family. Peggy spent her young life as a mother devoted to raising her children with strong Christian values. She was a dedicated wife who almost invisibly strengthened her husband’s prestige banking career. Peggy, along with her husband, Wilson, and son, Dave, moved to North Beach Maryland in 1975 and established the grass roots of Sneade’s Ace Home Center. Once again she offered the support so vital to a successful career for many years. Peggy was a woman of great strength, an encourager to any that were blessed to know her. She loved the Lord and her family with great faithfulness and loyalty. She hosted many family gatherings, sharing all that she was blessed with. Many memories to cherish for years were created through Peggy’s wonderful recipes. Peggy loved to read, a passion for the Lord’s words kept her immersed in His book. She enjoyed gardening, bird watching, challenging puzzles and was never without a pen to record all of life’s events. Peggy’s greatest accomplishments were not of notoriety, she was a very humble lady, Peggy found wealth in her relationship with her savior, the Lord Jesus Christ. She spoke only with words of encouragement and favor. Although her work on this earth is finished, she now rest in the arms of her Heavenly Father. ALL SERVICES WILL BE HELD PRIVATELY BY THE FAMILY. TO VIEW THE SERVICE LIVE, SCROLL UP THE THE BEIGE AREA FOR INSTRUCTIONS. In memory of Peggy, contributions can be directed to: Hospice of the Upstate in Anderson SC, 1835 Rogers Rd, Anderson, SC 29621

Peggy Ruth Sneade, 91, was born on January 16, 1930 to the late William Roosevelt McGinnis and Delola Emma McGinnis in Williamson, West Virginia. Surrounded by her family at home, she passed peacefully into God&#8217;s presence on April 9,... View Obituary & Service Information

To View the service live, click on the TRIBUTE WALL Tab and it will show the casket with an arrow in the middle. At 11AM click on the arrow.

Send flowers to the Sneade family.