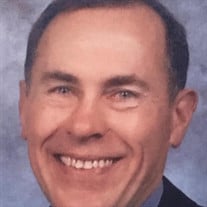 HUNTINGTOWN, MD. Raymond Lee (Ray) Wenderlich, died on Friday, November 20, 2020 surrounded by his family, after a long struggle with Frontal Temporal Degeneration. Born in Corning, NY, he was the son of Robert John Wenderlich and Richardean Ann Wenderlich. Raised in Painted Post, NY, Ray was a 1969 graduate of Corning West High School, and a 1973 graduate of the U.S. Naval Academy. He served in the Navy for 6 years, as an Electrical Officer and Reactor Controls Officer on the U.S.S. Mississippi, and as a Nuclear Training Officer on the U.S.S. Nimitz. Later, he graduated with a master's degree in engineering administration at George Washington University, and completed the executive management program at the University of Pittsburgh's Katz Graduate School of Business Administration. Ray had a passion for leadership throughout his career. He held several leadership positions in Constellation Energy (a Fortune 500 company), including two Vice President positions in Constellation Generation and multiple leadership positions in Energy Sales and Services, Customer Care, at the Calvert Cliffs Nuclear Power Plant, and at the Nine Mile Point Nuclear Station. He published a book on values-based leadership, called The ABCs of Successful Leadership. He also served as a Chairman of the American Red Cross Chesapeake Life Board, and was a member of the James Madison University Honors Program Advisory Board, the US Naval Academy Alumni Association, the Baltimore Service Academies Business Professionals, the American Nuclear Society, and the American Society for Training and Development. Ray lived his life in accordance with his personal mission statement: to make his life a masterpiece for our Lord, Jesus Christ. He cherished his wife Vicki and lived as a shining example to his children Ray and Amy. He loved jogging, dogs, country dancing, and rooting for the Dallas Cowboys. Ray is survived by his wife Victoria Lynn Wenderlich, his children Raymond James Wenderlich and Amy Marie Wenderlich, his two grandchildren Cameron James Schneider and Evan Turner Schneider, his mother Richardean Ann Wenderlich, his brothers Bob, Dave, Steve, Jim, Tom, John, and his sisters Ruth and Mary. A Mass of Christian burial will be held at Jesus the Good Shepherd Catholic Church, 1601 West Mount Harmony Road Owings, MD 20736 on Thursday, December 3, 2020 at 11:00 AM. The ceremony will be livestreamed on the Jesus the Good Shepherd Catholic Community YouTube channel. A celebration of life honoring Ray will be held at a later date. In lieu of flowers, memorial contributions may be made to the Association for Frontal Temporal Degeneration or the Maryland Right to Life

HUNTINGTOWN, MD. Raymond Lee (Ray) Wenderlich, died on Friday, November 20, 2020 surrounded by his family, after a long struggle with Frontal Temporal Degeneration. Born in Corning, NY, he was the son of Robert John Wenderlich and Richardean... View Obituary & Service Information

The family of Raymond "Ray" Lee Wenderlich created this Life Tributes page to make it easy to share your memories.

Send flowers to the Wenderlich family.