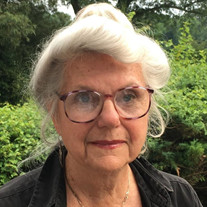 Rhoda Ann Allen (1946-2021) On June 6, 1946, the lights in motor city burned just a little bit brighter as Rhoda Ann Clugston entered the world. She was the only child born to Roy and Marge Clugston and would bless their lives for years to come. Rhoda attended Detroit public schools and graduated from Cooley High School in 1964. Motown music followed her ever after, with the Supremes, Smokey Robinson and John Lee Hooker often echoing through the Allen home. Her father Roy was an entrepreneur who manufactured and sold rubber goods to Detroit car makers. He was also a boater and fisherman on Lake Erie and taught Rhoda at a young age how to fish. And boy did she know how to catch ‘em. When she married and moved with her own family to be near the Chesapeake Bay, she gave the orders for the right depth for Rockfish, the right trolling speed for the Blues. Rhoda attended the University of Michigan earning a bachelor’s degree in education. Along the way she spent a year at college in Sheffield, England where she also taught school. Joining United Airlines as a flight attendant, she soon rose in the ranks to become Passenger Service Manager at Washington’s Dulles Airport. In that position she applied her diplomatic skills to massaging the egos of celebrities demanding Red Carpet room privileges and dragging her fiancé to code red emergencies when there were bomb threats at the airport at three in the morning. In 1978 Rhoda married John Allen who was working as a film producer with the American Red Cross. Together – with their business partner at the time, Blaine Baggett - they founded the film production company, Signature Communications in 1981. Their business adventure together began with John writing and producing their documentary programs and Rhoda overseeing business and educational program development. As Rhoda put it, “he writes the scripts and I write the checks.” It may have been that clear understanding of roles that led not only to their success as business partners but as lifetime partners for some 43 years. Retiring from Signature in 2018, Rhoda most recently worked in the finance office at Huntingtown High School in Calvert County Maryland. Rhoda was an innovative organizer and planner of family outings and other gatherings including Minecraft themed birthday parties and the annual Great Maryland Garlic Fest held at the family home for many years. She enjoyed online gaming and loved the music of Nick Cave and Leonard Cohen. In recent years, she studied philosophy, reading (and often quoting) the Stoics, Taoist thinkers, Lao Tzu and Plato. Rhoda gathered around her artwork by Erte and early 20th-century illustrator Charles Dana Gibson, always affecting a Gibson girl look with her long silver hair and signature bun atop her head. On September 29, 2021, Rhoda died of an aggressive form of cancer at age 75. She is survived by her husband John, daughter Chelsea and grandchildren Samson, Kaia, and Rider, whom she and John adopted in 2015. They will all miss her and the exceptional role she had in shaping their lives. A celebration of Rhoda’s life will be held at Grace Brethren Church, 9870 Old Solomons Island Road, Owings, MD 20736 on Saturday, October 16, 2021 at 4:00 pm. In lieu of flowers, the family suggests that you consider a donation to the Arts Council of Calvert County-Mary Beth Harry Memorial Scholarship fund.

Rhoda Ann Allen (1946-2021) On June 6, 1946, the lights in motor city burned just a little bit brighter as Rhoda Ann Clugston entered the world. She was the only child born to Roy and Marge Clugston and would bless their lives for years to... View Obituary & Service Information

The family of Rhoda Ann Allen created this Life Tributes page to make it easy to share your memories.