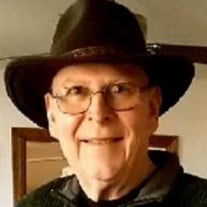 “A Life Well Lived” Richard Paul Campbell, “Rick” 70, returned to his Heavenly home on June 15, 2021 after a courageous battle with cancer. His devotion to his family and his firm belief in God supported him in his struggle and ultimately gave him peace. Rick was born to Harry and Joan Campbell on May 18, 1951 in Woodbury New Jersey. He joined the United States Air Force as a medic and worked his way through the ranks, retiring after 21 years as a captain. Finding his calling in the military, Rick was accepted into the very competitive school (USHUS) and trained to become a physician’s assistant. Completing his schooling, Rick received his BA in health sciences from Nebraska University. An excellent clinician and problem solver, he was called upon heavily and earned the nickname “The A Team.” Loved by his colleagues everywhere, he enjoyed all fields of medicine, but he loved geriatrics the best because of “its complexity.” He was a manager of the Baltimore region in the Adfinitas Health Group Medic Health Group, Evercare Health Group of Baltimore, MD. A well decorated life, Rick earned many awards, including “Outstanding Educator for the Cholesterol Lowering Program in Albuquerque New Mexico Valedictorian of Victory Love Bible School of Ministries. He attended and completed his three year degree with his wife, Vera Marie Campbell. Together they served in lay ministries in every new duty station in churches across the United States. Rick and Vera were announcers for the Christian radio station in Ft. Walton Beach for a brief period; Psalms Radio. Through his career in the Air Force, Rick was awarded the following medals of honor: Outstanding Unit Awards, Good Conduct Medal, National Defense Service Medal, Vietnam Service Medal, Overseas Short Tour Medal, AF Longevity Service Ribbon Vietnam Gallantry Cross, Republic of Vietnam Campaign Medal, served in support of Operation Desert Shield and Desert Storm. Rick was a member of the Maryland Academy of Physician’s Assistants and Bethel Assemblies of God. Rick was blessed to have a large and loving family. His two sisters and brother, Patti Ignomirello and husband (Michael), Gail Victory and husband (Wayne), Jeff Campbell and wife (Terri) reside in Nashville Tennessee. They stayed close during the covid pandemic by playing “Words with Friends” a lot! Rick’s son, Brian Jeffrey Campbell resides in Texas with his children; David, Destiny, Ashia, Dominic and Yakira. Rick was a single dad raising his son with patience, discipline and humility. He taught his son to love God first and He would help him in life. Rick’s devotion to his son was evident when this young man battled cancer. Brian was hospitalized for 55 days straight, with Rick taking a “fast food dinner” to him each night after work. He married the love of his life, Vera Marie Campbell, and together they walked through life for 42 years. He respected and protected his wife and son and provided for them all of his 42 years. Rick enjoyed “all things sports,” teasing his sisters when the Baltimore Ravens would beat the Tennessee Titans. His love for music and the Lord were shared by Vera, who sings for the NCC. He was always ready to share what made him different through his life. Rick is survived by his wife and son. He loved the following scripture verse and quoted it frequently, reminding us all what really is important: “For none of us lives to himself alone and none of us dies to himself alone. If we live, we live to the Lord and if we die, we die to the Lord. So whether we live or die, we belong to the Lord.” Romans 14: 7-8. Visitation will be at Lee Funeral Home, 6633 Alexandria Ferry Road, Clinton, MD 20735 on June 27, 2021 from 2:00 p.m. to 4:00 p.m. and 5:00 p.m. to 7:00 p.m. Funeral Service will be at Maryland Veterans Cemetery, Cheltenham, 11301 Crain Highway, Cheltenham, MD on June 28, 2021 at 10:30 a.m. In lieu of flowers, donations may be made for the National Christian Choir and Bethel Christian Academy.

The family of Richard Paul Campbell created this Life Tributes page to make it easy to share your memories.

Send flowers to the Campbell family.