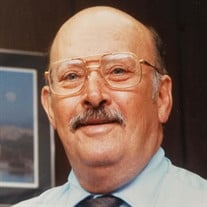 Richard James Laughlin, Dick to his close friends and co-workers, age 86, of Osage, Iowa, passed peacefully on Sunday, July 26, 2020 at his home of 55 years in Clinton, Maryland surrounded by the loving care of his family and friends at his beloved home. Richard is predeceased by his wife of 65 years, Odette Eugenie, his parents Clarence Austin and Margret Bailey Laughlin, his siblings; Robert, Waldo, Stewart, Clarice, Daisy, Glen, William, Kenneth, and Mary. Richard is survived by his sister Peggy, his sons; Ara Laughlin and his son Justin, Clarence Laughlin and his wife Jenny and their daughters Tara and Courtney, and Mike Laughlin and his children Kelly and Eric. Richard was born on August 22, 1933 in Osage, Iowa to Clarence and Margret Baily Laughlin. As a young man in Iowa he would go fishing and hunting with his friends and brothers. As the brothers got older each one joined the military. When Richard’s turn arrived, he joined the Marines but was not allowed to fight due to the Sullivan Law. He was stationed at the Syrian Embassy where he met Odette in 1954 and got married in 1955. The wedding took place at the Eglise Saint Francols Parish in Beruit Lebanon in 1955. Their first home after leaving Syria was Camp Lejeune, North Carolina. After his stint in the Marines, he transferred to the Air Force where he got into the electronics field. While in the Air Force, Richard was stationed in Germany, South Dakota, Michigan, and Washington, DC. Richard finished his Air Force career at Andrews Air Force Base working in the 89th Presidential Air Wing working on radar on Air Force One, the airplane for the President of the United States. Before his retirement from the Air Force, Richard had a small lawn cutting business and did construction work which is a testament to his many talents. Richard built a 40’ x 40’ deck that is 40 feet tall and looks like the start of a bridge leading into Fort Washington from Tantallon. Just below the deck he built the first floating dock on the Potomac River. Richard served his country for 20 years and retired from the Air Force in 1970’s. Richard went into the civil service where he was a Quality Assurance Specialist working at the Northrop Grumman’s Plant in Baltimore, Maryland and was recognized as a Soldering expert. In support of the Secretary of Defense’s expedited deployment of the Tactical Endurance Synthetic Aperture Radar (TESAR) use on the Predator UAV that was sent to Bosnia. He identified significant hardware defects to the contractor and caused corrective action before its deployment. His assistance to the National Aeronautics and Space Administration (NASA) and government investigative offices in reviewing test/documentation records produced by a Florida Contractor that resulted in a Federal Grand Jury returning a fraud incitement against the contractor. His expertise as a Quality Assurance Representative and was recognized throughout DoD due to his performance dedication and integrity, this brought credit to himself, DCMC, and the Defense Logistics Agency. He enjoyed his work tremendously. After his second retirement as a civil servant, Richard served his country for over 40 years. Richard continued to do work for his friends and family in retirement and he also made time for his beloved fishing with his sons and friends. Richard was a devoted father, grandfather, and friend, who would do anything to lend a helping hand but he was very meticulous and wanted things done correctly so there was no time table for his work. His knowledge and work ethic will truly be missed by all, but is carried on by his children and grandchildren.

Richard James Laughlin, Dick to his close friends and co-workers, age 86, of Osage, Iowa, passed peacefully on Sunday, July 26, 2020 at his home of 55 years in Clinton, Maryland surrounded by the loving care of his family and friends at his... View Obituary & Service Information

The family of Richard James Laughlin created this Life Tributes page to make it easy to share your memories.

Richard James Laughlin, Dick to his close friends and co-workers,...

Send flowers to the Laughlin family.