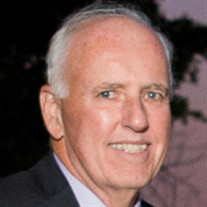 Robert Paul Gallagher, “Bob” of Owings, MD passed during the early morning on the 17th of September 2020 at the age of 66 years. Born in Jersey City, New Jersey, son of Adele Daneri Gallagher and John Edward Gallagher. Bob grew up in New Jersey, graduating from Marist High School, a catholic college prep school located in Bayonne, New Jersey. He continued at Rutgers University in New Brunswick, New Jersey for his Bachelors Degree and then to Louisiana State University in Baton Rouge. Louisiana being home to 40% of the nation’s coastal wetlands, made it a prime location for him to study environmental sciences for his Master’s Degree. Bob’s pioneering work began at the Benedict Estuarine Research Laboratory (The Academy of Natural Sciences of Morgan State University) to study the effects of people’s activities on estuaries and coastal ecosystems. His love for environmental research eventually led him to The Smithsonian Environmental Research Center (SERC) where he met the environmental challenges of the 21st century. Bob was an Executive Officer of SERC until his death. Bob met Tatiana, his former wife of 32 years, while studying at Rutgers University in 1978. They married in 1982 and settled in Calvert County where they introduced their two children to their world. If you wanted to look for Bob, you could always find home during an evening sunset or with the earliest spring daffodils or amongst the flitting and dancing butterflies. His children learned his love of life and everything in it. His daughter recalled him naming his home, “Nature’s Oasis”. Growing up, she remembered their summer visits every year to the Jersey shore where they enjoyed the ocean and everything in it. Everyone who knew Bob considered themselves blessed to learn the many valuable lessons he shared. Intellectually gifted, with a rare combination of someone who had a love for life and an untiring understanding of what was important-simply living a life with those that you loved. He shared his greatest gifts, helping others to discover what had been there all along in the forces of nature, the first signs of a spring thaw, or the quiet beauty of freshly fallen snow. When his kids were growing up, they remembered a Dad who attended all of their sporting events, and was always their biggest cheerleader. He was their “walking encyclopedia” and there was never a shortage of love from his kind and gentle soul. His expression of love for his family and friends would always be given without circumstance or reason. He was an avid sports fan of the Washington Nationals and the Washington Capitals. His message in life was simply to notice and enjoy it. His love and memories of life will still be shared by his former wife of 32 years and the mother of his children, Tatiana Gallagher of Arnold, MD; his daughter, Larisa Gallagher of Miami, FL and son, Chris Gallagher (Tara) of Tampa FL; his brother of David Gallagher (Lorraine) of Somerset, NJ, and sisters Anne Murphy (Pat) of Arlington, VA and Eileen Witkowski (John) of Shrewsbury, NJ. The family will receive friends at Lee Funeral Home Calvert, 8200 Jennifer Lane Owings, MD 20736 on Saturday, October 10, 2020 from 9:00 AM – 11:00 AM where a Memorial Service will be held at 11:00 AM in the Funeral Home Chapel. Interment will be private. In lieu of flowers, contributions in memory of Bob may be directed to: The Smithsonian Environmental Research Center, Eternal Reefs and/or The Chesapeake Bay Foundation. NEW GUIDELINES FOR ATTENDING VISITATION / SERVICES. - 50 to 75 people max at any given time in Funeral Home. - Limit visitation to 15 minutes in visitation room to allow for others to express their condolences. - Funeral Services in Chapel limited to 70 people with four (4) people per pew. - Masks and six-foot social distancing still applies.

The family of Robert "Bob" Paul Gallagher created this Life Tributes page to make it easy to share your memories.

Robert Paul Gallagher, “Bob” of Owings, MD passed during the...

Send flowers to the Gallagher family.