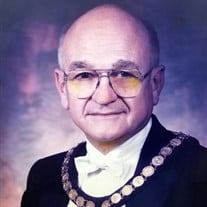 Robert “Bob” F. Drechsler, Past Grand Master of the Grand Lodge of the District of Columbia, passed away on Wednesday, October 20, 2021. He was 88 years old. A native Washingtonian, Bob was born on April 9, 1933, to Carl and Anna Agnes Drechsler. After his mother's death in 1935, he and his older siblings were raised in the German Orphan Home. He attended Anacostia High School where he was active in music, clubs, and the National Honor Society, later graduating from the University of Maryland with a Bachelor of Arts in Floriculture. Bob served in the United States Army and played for the Third Army Band as a clarinetist. He was honorably discharged in November 1962. Bob, affectionately known as “Bonsai Bob” in the bonsai community was the first curator of the National Bonsai & Penjing Museum at the U.S. National Arboretum, the first museum of its kind dedicated to the public display of the art of bonsai. He served in this position from 1975 until his retirement in 1998 and continued to volunteer at the Arboretum until 2015. When the U.S. government received 53 bonsai from Japan in 1975 for the Bicentennial Celebration in 1976, Bob was tasked with the care of these living gifts. Bob enthusiastically began studying and learning what it would take to nurture and train these potted plants. A scant amount of information was available at that time. In 1977, Bob traveled to Japan to learn how the Japanese had been caring for the bonsai. He learned first-hand from Japanese bonsai masters and nurserymen. He oversaw the construction of the Japanese Pavilion in addition to the North American and Chinese Pavilions which display these subsequent gifts and collections at the U.S. National Arboretum. In 2012, the First Curator’s Apprenticeship was established in his honor to train the next generation of bonsai artists. His forty years of government service garnered him several accommodations including recognition from the Nippon Bonsai Association and a Meritorious Service Award from the Bonsai Clubs International. Brother Drechsler began his long and distinguished Masonic career as a DeMolay in Anacostia Chapter, where he served as the Chapter’s Master Councilor in 1953, and for many years later as Chapter Advisor, and served the DeMolay Supreme Council as an advisor during their national leadership conferences. In 1969, he received the Order’s highest honor, the Legion of Honor (Active) and was elected an Honorary member of the DeMolay Supreme Council. He was raised to the Sublime Degree of Master Mason on August 16, 1954, in Anacostia Lodge No. 21, where he served as the Lodge’s centennial Master in 1969, and then as a trustee for over three decades. In 1987, he was awarded the Grand Lodge Distinguished Service Medal, the Fraternity’s highest honor. In1991, he was elected Junior Grand Steward and progressed through the Grand Lodge line until his election as Grand Master of Masons of the District of Columbia in 1997. Bob was also active in many of the District’s Masonic appendant bodies. He was a member of Columbia Chapter No.1, Royal Arch Masons; St. Simeon Stylites Conclave of the Red Cross of Constantine; the Royal Order of Scotland; Electa Chapter No. 2, Order of Eastern Star; Almas Shriners. He was particularly active, and much decorated member of the DC Scottish Rite, where he served as Venerable Master of Mithras Lodge of Perfection in 1977 and Wise Master of Evangelist Rose Croix in 1985, as well as Stage Director for fifteen years. He was invested with the rank of Knight Commander of the Court of Honour in 1975; coronetted an Inspector General Honorary, 33° in 1983; and elected a Grand Cross (the organization’s highest honor) in 2011. Perhaps his most lasting legacy was his chairmanship of the Grand Lodge Library and Museum Committee, which he held for over four decades. Under his stewardship, the Library and Museum relocated from the 13th Street Masonic Temple to its current location in the Grand Lodge office in the Palisades. He worked tirelessly to keep and manage the Grand Lodge’s historic collections, often performing the maintenance and cataloging efforts by himself. He led projects to organize, catalog and preserve the Grand Lodge’s most important and treasured relics. He served as a dutiful advisor and supporter to future generations of young DeMolays and Masons interested in learning more about Freemasonry in the District of Columbia, and he will be dearly missed by all. Bob is preceded in death by his siblings: Albert, Carl, George, Elsie, Thomas, Richard, Mary Louise and Gerald. He is survived by his sister Jane Ellen; sister-in-laws: Ann Drechsler and Barbara Drechsler; and many nieces and nephews. Visitation will be held at Lee's Funeral Home (6633 Old Alexandria Ferry Rd, Clinton, MD 20735) on November 8, from 10 a.m. to noon, with service to follow. In lieu of flowers, memorial contributions may be made to the National Bonsai Foundation at www.bonsai-nbf.org or to the DC Scottish Rite Center for Childhood Language Disorders at www.dcsr.org/scottish-rite-charity/ . .

The family of Robert F. "Bob" Drechsler created this Life Tributes page to make it easy to share your memories.

Send flowers to the Drechsler family.