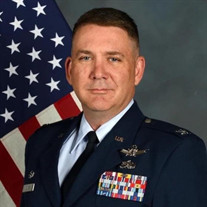 Son, brother, father, husband, friend, and missileer, Colonel Robert T. Ewers III died at home on 7 December 2021. The shock felt by his personal and professional communities has been deep and wide. Bob was born in Lincoln, Nebraska, on April 23, 1967. He preferred to keep that a secret to avoid embarrassment among his fellow CU alumni (Go Buffs!). Bob enlisted in the United States Air Force in 1987 as an aircraft maintainer. Following his commitment, Bob transitioned to the Air National Guard while attending the University of Colorado in Boulder. There he earned a Bachelor of Aerospace Engineering Sciences degree and commissioned as an Air Force officer and Intercontinental Ballistic Missile operator in 1995. Bob was a true technical expert and served as an instructor, evaluator, Flight Commander and Operations Officer. A superior leader, Bob commanded at the squadron and group levels. In 2003, he welcomed his first child, Carter, while at stationed at Malmstrom Air Force Base in Montana. When he received orders to Minot Air Force Base in North Dakota, Bob met Stephanie. They became friends, started dating, and married in 2012. In 2014, they welcomed a second child, Brock, while stationed at Francis E. Warren Air Force Base in Wyoming. To remember Bob is to know what it feels like to laugh enough to make your face hurt. Stephanie fell in love with his wit, and, along with anything outdoors, their favorite thing became making each other laugh. Many people knew Bob’s serious side, and were pleasantly surprised when they were able to be part of his laughter. Some favorites include multiple impressions of cartoon characters, opening the window in the car wash with sister, Amy, singing off-key to sister, Tonya, or his son, Carter. Bob is survived by his wife, Stephanie Ewers (Wheeler) of Arlington, VA, eldest son, Carter Ewers of Santa Barbara, CA, his son, Brock Ewers of Arlington, VA, mother, Donna Hodder (Steve) of Laramie, WY, father, Robert Ewers, Jr. and Judy Ewers of Chicago, IL, sister, Tonya Ewers of Denver, CO, sister Emily Boyle and husband Tim Boyle of Chicago, IL, sister Amy Ewers and fiancé, Coty Jackson of Fulton, MO, as well as many loving aunts, uncles, and cousins across the country. They will greatly miss Bob and his amazing stories. Bob’s Memorial Service will be held at the Hyatt Regency in Crystal City, Arlington, VA, on 8 January at 3:00 pm. Desire to contribute in his memory should be with donations to the American Foundation for Suicide Prevention. https://afsp.org/ John Dines is inviting you to a scheduled Zoom meeting. Topic: Colonel Robert Ewers Memorial Service Time: Jan 8, 2022 03:00 PM Eastern Time (US and Canada) Join Zoom Meeting https://us02web.zoom.us/j/81448369607?pwd=cG4vd1dISVowU1poRFdOVnNqbkVpdz09 Meeting ID: 814 4836 9607 Passcode: A10C One tap mobile +13126266799,,81448369607#,,,,*024341# US (Chicago) +19292056099,,81448369607#,,,,*024341# US (New York) Dial by your location +1 312 626 6799 US (Chicago) +1 929 205 6099 US (New York) +1 301 715 8592 US (Washington DC) +1 346 248 7799 US (Houston) +1 669 900 6833 US (San Jose) +1 253 215 8782 US (Tacoma) Meeting ID: 814 4836 9607 Passcode: 024341 Find your local number: https://us02web.zoom.us/u/kcZxlIX18

Son, brother, father, husband, friend, and missileer, Colonel Robert T. Ewers III died at home on 7 December 2021. The shock felt by his personal and professional communities has been deep and wide. Bob was born in Lincoln, Nebraska, on April... View Obituary & Service Information

The family of Robert Thomas Ewers III created this Life Tributes page to make it easy to share your memories.

Send flowers to the Ewers family.