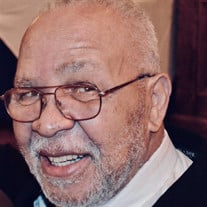 Robert “Bob” Willie Young, Sr. was born in Essex County, Newark, New Jersey on December 24, 1940. He was an early Christmas gift to his parents Willie and Irene (Lockhart) Young. He was one of 5 children and the oldest son. On Jan 4th 2021, after fighting a brief, but valiant fight, Robert was called home rejoining with his parents and other siblings who had passed on leaving behind his loving sister Joanne, to carry on the torch as the family elder. “Bob,” as he was called by his family and friends, grew up and attended schools in Washington, D.C. He graduated from Cordoza High School, in 1958. After High School, he lived a colorful life in the District of Columbia. However, Bob, as was consistent with the times in the District spent time playing dominoes, other games and recreational pursuits with his friends. He developed an affinity toward cars, and a thirst for learning about cars. Bob was a loving man, over the course of his lifetime; he was married three times and fathered, five wonderful children. Bob was a male Nurse in his early career. He took great pride in helping others. He was an intelligent man who worked in a variety of fields from concert promoter, accountant, and hotel office manager at various times in his life. Bob’s desire to help others was strong and he spent many years researching complex legal cases for wrongly imprisoned inmates to assist them in gaining fair re-trials. During this time, Bob rediscovered the lord, took responsibility for his actions and became a born-again Christian. He began a prison bible study ministry that was instrumental in helping others. He shared his own Christian journey from being out of grace to finding ever-lasting life as a believer in Jesus Christ. As with every well-written story Bob’s life had its twist and turns, in some cases harrowing escapes as well as trials and tribulations. Yet that all segued into a level of contentment and normalcy, the second half of his journey was nearly the opposite the first half. He created closer connections with his children, his nieces, nephews and grandchildren. He was a staunch believer in the power of forgiveness, and second chances and following the words of the Lord. He kept up to date on local and world news / events. Bob took great pleasure in watching old westerns, black and white classics, sharing words of wisdom, and listening to gospel and jazz music. Looking back over his life, it is a life well lived, in some places reminiscent of those classic movies he loved complete with Jazz soundtrack. He attempted to try his hand at modern technology, in most cases he was successful but, he and his iPhone spent many hours locked in mortal combat over which button to push to get “Siri” to respond in a helpful manner. That outcome will go down in the books as a draw! Robert “Bob” Young, Sr. was a complicated man. He was a fiery man who always had a smile for those he cared for most. Affectionately called “Pop’s, Daddy or Baba” by his children. His love for them was never in doubt no matter which way his life went. For him, Family was everything and there were no half’s, his children were all equal in his eyes. He was ultimately welcomed into the lords care a new man with a cleansed and blessed soul. Robert leaves behind to cherish his memory his loving sister Mrs. Joanne Carter (Philip) of Brandywine, Maryland. His three sons: Robert W. Young Jr. (Janice) of Los Angeles, California, Mark A. Young (Donnetta) of Wiesbaden, Germany, Robert H. Pinder. of Bowie, Maryland. His two daughters: Valarie R. Colmore of Temple Hills, Maryland and Michelle A. Young of NY, New York. His grandchildren: grandsons Rafael Young, Koty Young, Kirk Young and Robert (Bobby) Pinder, granddaughters, Roschida Young, Kristin Young, Myana Taylor and Abigail Pinder along with a host of nieces and nephews, most notably, Cynthia Simons (Herbert), Crystal Poindexter, Robyn Johnson (Derek), Carolyn Kamara (Alassane), and Tracey Hayes (Alfred). I have fought the good fight, I have finished the race. I have kept the faith. Finally, there is laid up for me a crown of righteousness, which the Lord, the righteous Judge, will give me on that Day, and not to me only but to all who have loved His appearing. 2 Timothy 4:7-8 (NKJV)

Robert &#8220;Bob&#8221; Willie Young, Sr. was born in Essex County, Newark, New Jersey on December 24, 1940. He was an early Christmas gift to his parents Willie and Irene (Lockhart) Young. He was one of 5 children and the oldest son. On Jan... View Obituary & Service Information

The family of Robert W. Young Sr. created this Life Tributes page to make it easy to share your memories.

Send flowers to the Young family.