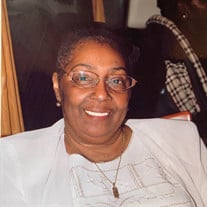 Roberta Anderson was born November 27, 1941 in Rimini, SC to the late James Thomas Logan and the late Robee Nelson Logan. The Lord called his angel Roberta, home to Glory on September 8, 2021. Affectionately called Cookie or Berta, she always loved networking and helping people. Her education was in the New York City Public School System and attended Brooklyn College in Brooklyn, New York. She worked as an interviewer at Brookdale Hospital for 10+ years while in New York City. On October 16, 1981, Roberta said “I do” and vowed to live happily ever after with Albert Anderson. This union prompted a move to Maryland where they still lived until she was called home. While in Maryland, she was a proud employee of BAE Systems Inc. but worked for a number of contractors with the Federal Government including the Central Intelligence Agency. Her career involvement with National Intelligence spanned 31 years and inspired some in the family to pursue similar career tracks. Roberta loved computers both working with them, and using them to keep up with her family. In her later years, her passion was caring for her many grand and most recently twin great grandchildren. She was a second parent to some and will always be remembered as being an essential part of what home is to many in the family she leaves behind. In addition to her parents, Roberta was preceded in death by a sister Mattie Lee Darby; sister-in-law Barbara Logan and a grandson DeLorean Logan. Roberta leaves to cherish her memories her husband and love of her life, Albert Anderson, siblings: Daisy, Emanual (the late Barbara), Robert (Charlie Mae), and Lenwood Logan, a cousin who was just as much a brother Sydney Burke Jr. (Aurora); two loving daughters: Nylene and Veleitta; grandchildren: Terrell, Janae, Nylia, Shayla, Precious, Nadja, DeAngelisse, Jason, Miracle, and Octavia; great-grandchildren: Sunday and Soliel Logan; and a host of other cousins, nieces, nephews, and loved ones.

The family of Roberta Anderson created this Life Tributes page to make it easy to share your memories.