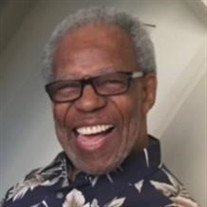 Ronald Lee Fowler, Sr was born on September 23, 1939 in Winston-Salem, NC to the late Victoria Wilson. He was raised by his loving uncle, Gasoway Fowler along with his late sister Remonia Williams. He entered his eternal rest on May 25, 2021. He attended and graduated from Mary McLeod Bethune High school in 1957. Shortly after high school, he married his now ex-wife, Maedella Fowler in 1958. From their union, came Ronald Fowler, Jr and the late Deborah Fowler. In the late 60’s he moved to the Nation's Capitol, Washington DC. He became a professional waiter for over 12 years with the Marriott Hotels. He took great pride in waiting tables, and would tell many stories about it. In 1972 he became a member of Central Baptist Church. While at Central, he joined the male chorus and traveled up and down the east coast singing the good gospel. One of his favorite songs to lead was “God Cares”. He parted ways with Central Baptist in 1980, but kept in contact with his brothers of the male chorus until present time. He took up the hobby of bowling, and joined a local bowling league. During a tournament, he met the late Sharon Epps and the chemistry was instant. During their long-term relationship, came their daughter Kelly Fowler, his pride and joy. Ronald started attending Evangel Cathedral in 1981. He became a member in 1985 and joined their adult choir. He left the choir after some time, but remained a faithful member of the church. He began working at Ronald Reagan National Airport in the early 1990’s as a shoe shiner. In 1997, Ronald was presented with the opportunity to open his very own shoe shine stand. His dream of owning his own business, finally came true. He later retired from working but kept his shoe shine stand in operation. Once retired, he started back bowling in a league for seniors. He also enjoyed his love for church and sharing God with anyone who would listen, singing through the house and in the car, going out and spending time with family and friends, meeting new people, going to the casino (“ching ching as he liked to call it) from time to time, and traveling. Ronald was preceded in death by his daughter, Deborah Fowler; mother, Victoria Wilson; his uncle, Gasoway Fowler; his sister, Remonia Williams; and his brother, Richard Landrum. Ronald leaves to cherish his memories: Son, Ronald Fowler, Jr of Winston-Salem, NC; Daughter, Kelly Fowler of Washington DC; Step-daughter, Zakiya Cole of White Plains, MD; Step-daughter, Jermere Cole of Winston-Salem, NC; Step-son, Rico Cole of White Plains, MD; Sister, Monica Campbell of North Potomac, MD; Sister, Saundra Paris of Old Bridge, NJ; Brother, Raymond Wilson of Atlanta GA; Sister, Janice Wilson of Newport News, VA. Two God-daughters he adored; Sharon McGee and Janae Fuller and a host of bonus daughters (Kelly’s friends), grandchildren, nieces, nephews, cousins, and an abundance of friends.

Ronald Lee Fowler, Sr was born on September 23, 1939 in Winston-Salem, NC to the late Victoria Wilson. He was raised by his loving uncle, Gasoway Fowler along with his late sister Remonia Williams. He entered his eternal rest on May 25, 2021. He... View Obituary & Service Information

The family of Ronald Lee Fowler, Sr. created this Life Tributes page to make it easy to share your memories.

Send flowers to the Fowler, family.