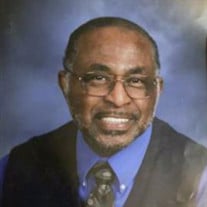 Ronald Joseph Jackson was born March 8, 1941, in Washington, DC , to the late Harrison Columbus and Elveta Conyers Jackson. He was educated in the District of Columbus Public School System. He attended Central State University in Wilberforce. Ohio, and DC Teachers College (UDC), where he earned his Bachelor's Degree. Ronnie held positions with the Architectural Department of the U.S. Capitol, the United States Postal Service, and the Chesapeake and Potomac Telephone Company. After earning his Master's Degree in Education, he began a career with the Library of Congress, which he retired from after 27 years. On July 24, 1987, he married Shirley Brooks. They loved to travel and had a very happy and love filled union until her passing in January of 2000. Ronnie was a member of Omega Psi Phi, Inc. fraternity. He was a "DIE HARD" Redskins fan, a history buff, and loved bowling so much that he was in 2 separate bowling leagues. Ronald was raised in the Baptist Faith, but eventually converted to Catholicism. He was well known at Our Lady of Perpetual Help Church and maintained close ties throughout his life. Until he fell ill in late 2019, he was a parishioner at Most Holy Rosary Catholic Church in Upper Marlboro. Sadly on Monday, March 15, 2021, he passed on at Autumn Lake Rehabilitation Center in Laurel, Maryland. Ronnie leaves behind to cherish his memory one son, Darryl Anthony Jackson; one brother, Harrison Godfrey "Bay" Jackson; one sister-in-law, Mary Anne Payne; six loving nieces and nephews, as well as a host of wonderful, loving and caring family and friends. For those who would like to attend services virtually please use the link and information given below: Join Zoom Meeting https://us05web.zoom.us/j/85680912886?pwd=QzBHakhUNVBLSG1tdlJoOHhCS2x6dz09 Meeting ID: 856 8091 2886 Passcode: t6pXjt

Ronald Joseph Jackson was born March 8, 1941, in Washington, DC , to the late Harrison Columbus and Elveta Conyers Jackson. He was educated in the District of Columbus Public School System. He attended Central State University in Wilberforce.... View Obituary & Service Information

The family of Ronald Joseph Jackson created this Life Tributes page to make it easy to share your memories.

Send flowers to the Jackson family.