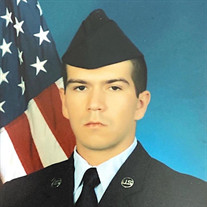 Senior Airman Ryan M. Cieslak, United States Air Force, stationed at Fort Meade, born on October 19, 1994 and formerly of Kennedy Township, Penn., died on Friday, December 18, 2020 in Odenton, Md. Ryan graduated magna cume laude with a double degree in economics and political science from the University of Pittsburgh before enlisting in the U.S. Air Force as a linguist, where he discovered a talent and passion for learning languages. He graduated from the Defense Language Institute in Monterrey, Calif. with distinguished honors, earning his associate of the arts degree in Arabic-Iraqi. In addition to his aptitude for studies, Ryan was a lifelong athlete and a strong runner, who earned several physical fitness accolades during his time in the Air Force, including the outstanding fitness award, top male finisher in physical fitness training during Air Force Basic Military Training and 2019 male gold champion for the German Armed Forces Proficiency Test — taking first place in a field consisting of some of the best military athletes from Canada, Germany and the U.S. Those who knew Ryan describe him as loyal, honest, funny and generous, with an appreciation for some of life’s finer things. He was treasurer of his squadron’s booster club, active in mentoring others and helped coach fellow airmen through their physical training assessment. A faithful son, loving brother, cherished nephew, and trusted friend, Ryan is survived by his parents Stanley Jr. and Kim Ann Cieslak, his sister Nicole (Andrew Flick) Cieslak, his aunt Yvonne (Michael) Kochka and his aunt Patricia (Dallas, late) Stewart. The family held a private memorial service in his honor. If you are moved to express sympathies, in lieu of gifts, flowers or cards, the family has requested donations be made in Ryan’s name to Wounded Warrior Project (woundedwarriorproject.org) or another veterans-related cause.

The family of Ryan M. Cieslak created this Life Tributes page to make it easy to share your memories.