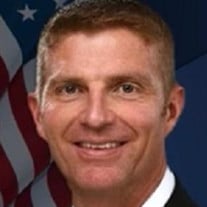 Scott Brown and his wife Laurie Brown, both 44, passed away in a tragic accident in Arizona. Scott was a caring father and devoted husband. He met Laurie on her first day on campus at UMBC, where he participated in ROTC while earning a bachelor’s degree. Following graduation, Scott served his country honorably as a U.S. Army Captain and Army Ranger. He deployed in support of Operation Iraqi Freedom and Operation Joint Guardian, where he earned numerous awards and medals. He transitioned to a career in law enforcement, initially as a Deputy with the Calvert County Sheriff’s Office. He earned several awards during his tenure. He joined the Health and Human Services where he led successful criminal and civil investigations. Scott is credited with a variety of improvements within the agency, most recently achieving a promotion to Special Agent in Charge of the National Training and Emergency Operations Branch. Scott loved his family deeply. He and Laurie were married for nearly 19 years. They were faithful members of Jesus the Good Shepherd Catholic Church. They have 3 beautiful children that they adored. Scott was so proud of his children and loved to support them in everything they enjoyed. Scott enjoyed a variety of activities including running, biking, and traveling as well as building and maintaining their home in Calvert County. Scott was so easy to talk to about almost anything, from serious to silly. He liked to joke around and act goofy at times. He is thought of as someone to look up to, a man of integrity and a treasured friend. He is well respected amongst his supervisors, peers, staff, neighbors, friends and family. Scott will be especially missed by his dear children Lindsay, Ciara and Ryan; his sister Kristine Brown and her children and his Aunt Alison. The family will receive friends at Lee Funeral Home Calvert, 8200 Jennifer Lane, Owings, MD on Friday, September 3, 2021 from 1:00 PM to 4:00 PM. A Mass of Christian Burial will be celebrated at Jesus the Good Shepherd Catholic Church, 1601 W. Mount Harmony Road, Owings, MD 20736 on Saturday, September 4, 2021 at 11:00 AM. Interment will follow at Church Cemetery. Please click on the link below to livestream the Funeral Service. https://www.youtube.com/jesusthegoodshepherdcatholiccommunity For anyone wishing to support the children of Laurie and Scott Brown, two options have been setup: An account has been established at the Dunkirk branch of the Bank of America in the name of the Brown's children. Donations can be mailed or made directly to the Bank of America in Dunkirk Maryland, made out to the account custodian, Patricia Musselman. Bank of America MD9-988-01-01 2995 Plaza Drive Dunkirk, MD 20754. A Gofundme page has also been established: https://gofund.me/961b59bb

Scott Brown and his wife Laurie Brown, both 44, passed away in a tragic accident in Arizona. Scott was a caring father and devoted husband. He met Laurie on her first day on campus at UMBC, where he participated in ROTC while earning a bachelor&#8217;s... View Obituary & Service Information

The family of Scott Michael Brown created this Life Tributes page to make it easy to share your memories.

Scott Brown and his wife Laurie Brown, both 44, passed away in...

Send flowers to the Brown family.