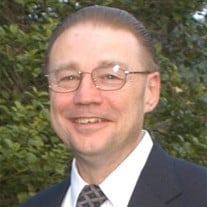 Sigmund Albert Gorski, Jr., of Huntingtown, MD, passed away on Friday, April 13, 2018, at the age of 70. Sigmund was born in New Brunswick, NJ on October 9, 1947. He was the oldest of three children born to Sigmund and Nellie [Kanoy] Gorski. The family moved to Greensboro, NC when Sigmund, Jr. was an infant. He graduated from Guilford College in Greensboro in 1969 with a BS degree in biology, chemistry, and physics. In August, 1969, he joined the faculty of Queen Anne School, a college preparatory school in Upper Marlboro, MD, as the Chair of the Science Department and remained there in various instructional and leadership capacities for nearly 40 years. In 1971, he married Jimmie Danner of Winston-Salem, NC, whom he met while both were in college. The couple lived briefly in Landover, MD, before moving to Bowie, MD. In 1979, they moved to Huntingtown, MD and had one son, Sigmund Albert Gorski, III “Al” in 1990. Frequently seen as a visionary by his colleagues in the sciences at the secondary and college levels, Sigmund, Jr., created interdisciplinary courses and integrated the latest technology into science courses in his department and in those around Maryland. The curricula he developed in ecology were recognized by the State of Maryland, as well as the Association of Independent Maryland Schools. For his work as the State Science Fair Coordinator, he received the Outstanding Achievement Award from the late Gladys Spellman, Member of Congress. Sigmund, Jr., achieved two Master’s Degrees in Science Education and in Technology from the University of Maryland, College Park. He also attended and presented at numerous state and national professional conferences. He was selected for the Martin Marietta Graduate Fellows Program, a partnership of business, industry, and education, and went on to serve on the advisory board for the program. His next venture was working for a federal contractor. He was fortunate to join JMA Solutions in 2011 and worked there for seven years in various capacities including project manager and Facility Security Officer. He made many friends at the company and developed skills and expertise in areas new to him. He considered himself very fortunate to be a part of the JMA family. Sigmund ,Jr., was a man of many interests and many gifts. His nature photography won awards in both local and national contests. He was a spectator of many sports and a player and coach of baseball and soccer. When his son, Al, became interested in scouting, Sigmund’s own interest was rekindled from his earlier days as a scout. He drew a great deal of pleasure from his years as an Assistant Scout Master for Troop 903 in Huntingtown as he worked with others to help boys in the troop achieve their goals in scouting. In 2009, he received the Western Shore District Service Award from the National Capital Area Council, Boy Scouts of America. As Chair of the Citizens’ Advisory Board on Natural Resources for Calvert County, the decisions of his committee were used to advance an understanding of the importance of conservation. On the board, he met Alan Hayes, who became a longtime friend. Together the two created Volanz Aerospace, a non-profit corporation formed to provide space science and space-related high technology education and research opportunities. Volanz was recognized by NASA for the execution of the Astronaut Glove Challenge during NASA’s Centennial Challenges. Spaceflight Institute, an intensive program of learning, confidence building, and teamwork within a space motif, was designed by Volanz for students with a high interest in space exploration. In 2014, a crowning achievement was the opening of the Spaceflight Museum, specializing in manned spaceflight operations, at the Arthur Storer Planetarium in Prince Frederick, MD. With the Spaceflight America Museum open and operational, in 2015, Sigmund, Jr., embarked on yet another venture, Spaceman Productions, LLC with friend and colleague Alan Hayes. At Spaceman, with Sigmund, Jr., serving as one of the executive producers and chief video editor, the team produced shows for Amazon and NBC. The current program “Weeknight”, a talk variety show, will be filmed in Calvert County on April 28, 2018, and will be shown later this summer. Sigmund, Jr., is survived by his wife, Jimmie Gorski, of Huntingtown, MD, and son Al of Durham, NC; two sisters: Susan Marks (Darrell) of Pinehurst, NC and Kathy Parcell (Jerry) of Clemmons, NC; nieces Kelly [Marks] Russell (Terrell) of Chapel Hill, NC and Corey Deese (Joshua) of Pembroke, NC and nephew, Jason Parcell (Vickie) of Clemmons, NC; uncle, Jack Kanoy (Harriett) of Greensboro, NC and an aunt, Katherine Snyder of Richmond, VA, as well as by many cousins. A loving husband, father, son, brother, nephew, and uncle; a dedicated and innovative educator; a concerned and vocal citizen; and a steadfast friend, Sigmund Gorski, Jr., remained a devout Christian throughout his life, loyal to his Catholic faith. His family invites friends to Lee Funeral Home Calvert, 8200 Jennifer Lane, Owings, MD 20736, on Friday, April 20, from 3 to 5 and 6 to 8:00 pm. At 7 pm a Prayer Service and Knights of Columbus Service will be held. A Mass of Christian Burial will be celebrated on Saturday, April 21, at 11:00 am at Jesus the Divine Word, 885 Cox Road, Huntingtown, MD 20639. Inurnment will follow at the Jesus the Good Shepard Cemetery, 1601 W. Mt. Harmony Road, Owings, MD. Memorial contributions can be made in Sigmund’s name to the Knights of Columbus, Jesus the Divine Word Council - #14775, P.O. Box 1151, Huntingtown, MD 20639.

Sigmund Albert Gorski, Jr., of Huntingtown, MD, passed away on Friday, April 13, 2018, at the age of 70. Sigmund was born in New Brunswick, NJ on October 9, 1947. He was the oldest of three children born to Sigmund and Nellie [Kanoy] Gorski.... View Obituary & Service Information

The family of Sigmund Albert Gorski, Jr. created this Life Tributes page to make it easy to share your memories.

Sigmund Albert Gorski, Jr., of Huntingtown, MD, passed away on...