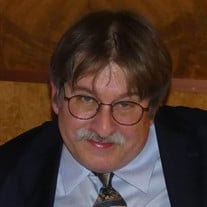 Steven Kuhn Palmer was born November 22, 1960 in Hawaii. He was a beloved husband to Connie Powell Palmer for an amazing 11 years and together for 17 years. He was the son of the late Charles and Colleen Palmer and a beloved brother to Pamela Palmer, David Palmer and his wife Martha, and Teresa Friedman and her husband Allen. He enjoyed being a stepfather to Matthew Powell. While also being an active Uncle to Alex, Candace, Anna, Charlie and Nona. Steven was part owner for over six years with his backbones, Dana Bustin and Theresa Hudson at Patuxent Printing. Prior to that Steven worked sales and operations at various Mail shops. Just to take it back a couple decades ago, he graduated in 1979 from Central High School. Then a year later, he joined the United States Air Force where he served for four years. Steven and Connie enjoyed touring Civil War battlefields and historic monuments, while also watching John Wayne and soap operas believe it or not. He loved playing his guitar and was even giving lessons to everyone’s favorite friend, Joy. He loved his Atlanta Braves, Boston Celtics and Washington Redskins. And let’s not forget about The Beatles, Bob Dillon, Crosby, Stills, Nash and Young that got Steve through all of his days. He was a true hippie in the 2000s, always wearing tie dye and saying things like that’s groovy man. His presence was never unknown, especially when politics got involved… nevertheless he was a stand his ground type of man or some may say stubborn… but in the greatest way possible. Steven is going to be missed by everyone. But the most comforting part from all of this sadness is that his mom and dad were waiting with open arms next to Jesus in Heaven as he was lifted up… Probably with a joint and shot of jack. The family will receive friends at Lee Funeral Home Calvert 8200 Jennifer Lane Owings, MD 20736 on Monday, December 6, 2021 from 10:00 am – 12:00 pm where a Funeral Service will be held at 12:00 pm in the Funeral Home Chapel. Interment will follow at Southern Memorial Gardens Cemetery 10155 Ward Road Dunkirk, MD 20754.

Steven Kuhn Palmer was born November 22, 1960 in Hawaii. He was a beloved husband to Connie Powell Palmer for an amazing 11 years and together for 17 years. He was the son of the late Charles and Colleen Palmer and a beloved brother to Pamela... View Obituary & Service Information

The family of Steven Kuhn Palmer created this Life Tributes page to make it easy to share your memories.

Send flowers to the Palmer family.