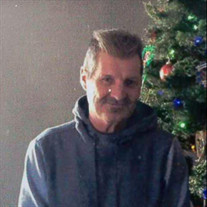 Thomas “Sonny” Gardiner formally of Brandywine, Maryland passed away peacefully with his family by his side on Sunday, January 17, 2021. Sonny was born to the late Richard and Margaret Gardiner on November 16, 1962. Sonny grew up in Croom, Maryland on a small tobacco farm with his sisters and brothers; John, Sissy, Charles, Richard, Ernie, Priscilla, Claudia, Margaret, and Leroy. Sonny loved sports, especially the Washington Football Team. He worked in Drywall boom trucks for years, he also mowed grass, and began to work for his brother Johnny putting up fences. Sonny worked for his brother Johnny for many years until he was diagnosed with cancer in 2015, even after his diagnosis he would continue to mow grass up until the fall of 2020 when his cancer got worse. During those times he lived with Johnny until moving to Virginia with his sister Sissy and her husband Jimbo. In time his illness became too strong and all treatment options had been exhausted. Sonny is survived by his son Ryan Gardiner; sisters, Claudia “Dixie” Ogg, Elizabeth McKenzie; brothers, John “Johnny” Gardiner and Charles “Charlie” Gardiner; and many nieces and nephews. He is predeceased by his parents Richard and Margaret; sisters, Priscilla Fields and Margaret “Maggie” Hardesty; and brothers, Richard Gardiner, Ernie Tippett, and Leroy Tippett. In lieu of flowers donations or contributions may be made to the Hospice of the Chesapeake, 9500 Medical Center Dr. Ste 250, Largo, MD 20774

Thomas &#8220;Sonny&#8221; Gardiner formally of Brandywine, Maryland passed away peacefully with his family by his side on Sunday, January 17, 2021. Sonny was born to the late Richard and Margaret Gardiner on November 16, 1962. Sonny grew up... View Obituary & Service Information

The family of Thomas "Sonny" Gardiner created this Life Tributes page to make it easy to share your memories.

Send flowers to the Gardiner family.