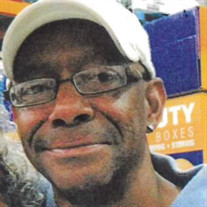 As for me, I am already being poured out as a libation, and the time of my departure has come. I have fought the good fight, I have finished the race, I have kept the faith. (2 Timothy 4: 6-7 Sunrise: March 13, 1960 Sunset: December 14, 2020 On Monday, December 14, 2020 in the early morning hours Timothy entered eternal rest. His transition was peaceful, and he was in the comfort of his home with his loving family. Despite his declining health over the past several months Timothy remained positive and active and continued to care for his wife and family. Timothy Glenn Coles aka, Tim, Timmy and Junebug was born in Newport News, Virginia on March 13, 1960 and was the youngest of 8 children born to Howard and Peggy Coles. As a baby, Timothy was baptized into the Catholic faith. Timothy was educated in the Newport News public school system and later joined the Army. Timothy made the military his career and his service spanned 20 plus years as he served Army active duty and reserve duty in the Army Reserve and the National Guard. Timothy received: An Army Service Medal, a National Defense Service Medal, a Southeast Asia Service Medal with Bronze Service Star-2, Kuwait Liberation Medal-Saudi Arabia along with the Army Good Conduct and Army Achievement Medals. Timothy met the love of his life, Darlean Catchings and married into an established family, together they raised Caleb the grandson. Darlean’s three children became Timothy’s family as well. After his career with the military ended, Timothy worked several jobs and later became partners with his wife in a business venture, Gentlemen’s Thrift located in Clinton, Maryland. At the encouragement of his wife Darlean, Timothy worshipped at Rehoboth New Life Christian Center in Clinton, Maryland. Timothy often said how he was blessed; grateful and proud to be married to Darlean. He was proud of the medals he earned during his years of service and Timothy was proud to purchase his first home, he was looking forward to hosting the family reunion. Preceding him in death are his parents: Howard B. and Peggy E. Coles. He leaves to mourn his loving wife, Darlean who indicated Timothy was her best friend, lover, confidant in addition to being her eyes and protector. His 7 siblings, three brothers: Howard B. Coles III (Betty deceased) of Newport News, Virginia; Tyrone C. Coles (Vivian) of Eddy Texas; Michael R. Coles of Newport News, Virginia; four sisters: Penny Wells and Deidre Poindexter both of Newport News, Virginia; Toni B. Greene (Pershing) of Clinton, Maryland and Cheryl A. Coles of Capital Heights, Maryland. Also, to mourn Timothy’s passing is a host of nieces, nephews, cousins, friends and a host of adopted sons and daughters who affectionately called him “Pop”. There are so many people to thank and without naming names, we want to thank the “village” of people who did so much for Darlean and the family. What you did (and do now) will always be appreciated. Thank You! I would be remised if I failed to mention Timothy’s love for the Dallas Cowboys, swimming and fishing. He once said he always keeps his fishing pole with him so when he came across water, even a puddle he was subject to cast his fishing pole. We love you and miss you Timothy.

As for me, I am already being poured out as a libation, and the time of my departure has come. I have fought the good fight, I have finished the race, I have kept the faith. (2 Timothy 4: 6-7 Sunrise: March 13, 1960... View Obituary & Service Information

The family of Timothy Glenn Coles created this Life Tributes page to make it easy to share your memories.

As for me, I am already being poured out as a libation, and the...

Send flowers to the Coles family.