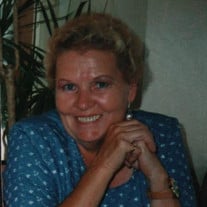 Ursula Disharoon, formally of Camp Springs and Owings, MD passed away comfortably at her residence on Monday, May 10, 2021. Ursula was a beloved daughter, sister, mother, grandmother, aunt and friend. Ursula was born February 8, 1929 in Breslau, Germany to Elfriede (Meyer) and Heinz de Lage, now both deceased. Ursula worked for the Prince George’s County Public Schools, retiring in 1991. She was a volunteer at Malcolm Grove Medical Center, Andrews Air Force Base for 29 years. She continued to volunteer until 2020. In 1956, she came to the United States as a nanny, working for a military family who was transferred to California. There she met the love of her life, Franklin “Frank” Fleetwood Disharoon. Frank was a Master Sgt. in the Air Force and also a Vietnam Veteran. Together, they traveled throughout the United States. The joy of their life their son, Frank Scott, born in 1962. Later they moved to Andrews Air Force Base and bought a home in Clinton. In 1996, after Frank’s death, she built her home in Owings. Ursula loved reading. Sometimes reading two books at once. She loved her Fairview Library friends. She had many talents. Loved to cook and bake, crocheting, knitting and taking care of her Coton de Leur puppy “CoCo”. She was an active Grandmother attending school functions and helping Joshua and Matthew with many Cub and Boy Scout activities where their father Frank was a Den Leader for the Dunkirk Troop. Ursula was predeceased by her parents Elfriede (Meyer) and Heinz de Lage, her husband Frank Fleetwood, her son Frank Scott and her brother Lothar. Ursula leaves loving memories to be cherished by her family. She is survived by her Daughter-in-law, Debra Kidwell Disharoon, grandsons Joshua and Matthew Disharoon, Sisters Maud de Lage, Dagmar Faust and Sigrid Ullrich, numerous nieces and nephews, and many friends who became family to her. Ursula’s family would like to thank all of our healthcare providers and volunteers who assisted with her care. Her last days at home were with Calvert Hospice who helped us get through the difficult days. A Graveside Service will be held at Maryland Veterans Cemetery 11301 Crain Highway, Cheltenham, MD 20623 on Tuesday, May 18, 2021 at 10:30 AM. For those desiring, contributions in memory of Ursula, may be directed to Calvert Hospice P.O. Box 838, Prince Frederick, MD 20678.

Ursula Disharoon, formally of Camp Springs and Owings, MD passed away comfortably at her residence on Monday, May 10, 2021. Ursula was a beloved daughter, sister, mother, grandmother, aunt and friend. Ursula was born February 8, 1929 in Breslau,... View Obituary & Service Information

The family of Ursula Disharoon created this Life Tributes page to make it easy to share your memories.

Send flowers to the Disharoon family.