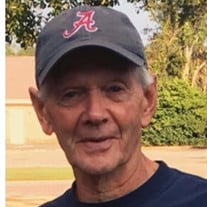 Wallace David Dozier passed away February 1, 2021 with his family by his side, in Annapolis, MD. He was 82 years old. Wally was born May 26, 1938 in Washington, DC to the late Milton and Anna Dozier. He grew up in Washington, DC and resided in Upper Marlboro, MD. In 1961, Wally was drafted by the Army and stationed in Germany. He received recognition as an Expert Rifleman of the M-14 and received an Honorable discharge in 1963. After his discharge, Wally also served in the Army Reserves. In 1966, Wally married Sherry Flowers; their loving marriage lasted 55 years. Wally worked for Pepco from 1959 to 2006. He handled a range of utility duties, and his dedicated work ethic set an example for those around him. Wally was also a regular player on Pepco’s baseball team. Since his retirement, Wally has enjoyed taking road trips with his wife and visiting his family located along the Gulf Coast. Wally was an avid reader, especially of military books, and he has a wide-ranging library collection of books and videos. He was particularly fond of his collection of citations for Congressional Medal of Honor recipients, dating from the War on Terrorism (Afghanistan) to the present. Wally was also a dedicated football fan of the Green Bay Packers and the Alabama Crimson Tide. His sports memorabilia collection includes rare items that only the most dedicated fans own. Wally also enjoyed maintaining a daily fitness routine and could arm wrestle the best of the best. His knack for solving crossword puzzles has been passed along to his children. Wally was a member of the VFW and the American Legion. He is survived by his children: Angela Dewberry (Robbie Dewberry) of Bay Minette, AL, Theresa Dozier of Annapolis, MD and Catherine Hunt (Curt Hunt) of Daphne, AL; grandchildren: Joseph Ganey (Santana Ganey) and Zachary Ganey (Erin Ganey) (AL); great-grandchildren: Payton, Drake, Kamdon, Tukker, Riley, Autumn, Chase, Chloe, Cadi, and Leo (AL); nieces: Kelly Horecky, Colleen Horrell; and nephews: Timothy O’Connell, Danny O’Connell and Tommy O’Connell. Preceded in death by his parents: Milton Wallace and Anna Lorraine [Curtin] Dozier; his sister, Beverly Ann Boswell and brother, Mickey Littleton.

Wallace David Dozier passed away February 1, 2021 with his family by his side, in Annapolis, MD. He was 82 years old. Wally was born May 26, 1938 in Washington, DC to the late Milton and Anna Dozier. He grew up in Washington, DC and resided... View Obituary & Service Information

The family of Wallace David Dozier created this Life Tributes page to make it easy to share your memories.

Wallace David Dozier passed away February 1, 2021 with his family...

Send flowers to the Dozier family.