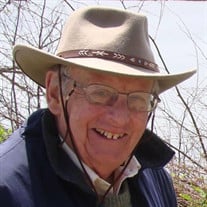 With great sadness, the family of William Murrie Clevenger announces his passing on January 21, 2021, at the age of 89. Born in Plainfield, New Jersey, Bill spent his life serving his country at home and abroad, eventually settling in Lower Marlboro, Maryland, with his wife Mary Whitall Thomas Clevenger and their three children. After graduating from the Hotchkiss School and Princeton University, he served in the Navy as an intelligence officer before joining the Foreign Service. A skilled linguist, his postings included Aleppo, Syria, as well as Tehran and Meshed, Iran. He left the Foreign Service to continue his education in Middle Eastern Studies at St. Antony’s College, Oxford University in England. Upon returning to the United States, he worked for the World Bank before becoming an analyst for the General Accounting Office (now the Government Accountability Office). During this time, he and his wife restored an 18th century house, Patuxent Manor, where they lived for 51 years. He is survived by his wife of 53 years, Whitall, his children James (Kristin Quirk Clevenger, grandchildren Tommy and Logan); Caroline (Melia Heimbuck, grandchildren Adeline, Eliot and Evelyn); and Andrew (Deborah Roseman, deceased, grandchildren Tate and Van); and his sister Ann Burr Henahan (Michael Henahan), and nieces and nephews. His parents, James Logan Clevenger, Jr., and Esta (nee Murrie), and two siblings, James Logan Clevenger, III, and Esta Clevenger, preceded him in death. With a sharp mind and a keen wit, Bill maintained a lifelong interest in antiquity and literature as well as politics and world affairs. He loved classical music and hot jazz, merlot and good conversation. He was an accomplished chess and bridge player, and played squash at the Maryland Club, Baltimore, into his eighties. Affable and genial, he made friends easily, and he will be dearly missed by his family and all those who loved him. He was a longtime member of Jesus the Good Shepherd in Owings, MD. Services private.

With great sadness, the family of William Murrie Clevenger announces his passing on January 21, 2021, at the age of 89. Born in Plainfield, New Jersey, Bill spent his life serving his country at home and abroad, eventually settling in Lower... View Obituary & Service Information

The family of William Murrie Clevenger created this Life Tributes page to make it easy to share your memories.

With great sadness, the family of William Murrie Clevenger announces...

Send flowers to the Clevenger family.