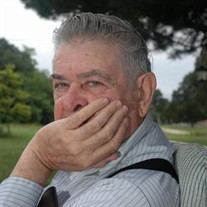 On September 9th William Dean Harmon passed away at the age of 88, survived by his children: Wendy Yessler, Michael Harmon, Richard Harmon, David Harmon, and William Harmon, Jr.; and grandchildren: Nathan Yessler, Nanette Yessler, Jackie Harmon, Matthew Harmon, and Naomae Harmon, along with a legacy of adventure and kindness. William, or Bill, as he was known, was a NASA engineer during the space race and Army veteran whose exploits took him to Africa and the Middle-East. He grew up during the Depression, and formed a love of history, science fiction, and aeronautics at an early age that inspired him to look beyond the orthodox and the ordinary. He was married to the love of his life, his late wife Mary for over 60 years. They had five children, and enjoyed a good life with family, involving himself with local and foreign ministry work, self-education, and expanding his knowledge of the world. Bill's greatest success was his faith, and by it his humanity, his ability to empathize with others and teach kindness through his actions, even when wronged. Over the course of his life, he elevated others and left an impact that echoes far beyond what he knew. Although he may be gone, his heart is still with us, and the spirit with which he reached out to others is carried on through his loved ones. If we can all retain just a bit of that humanity, the world will be a brighter, kinder place.

The family of William Dean Harmon Sr. created this Life Tributes page to make it easy to share your memories.

On September 9th William Dean Harmon passed away at the age of...

Send flowers to the Harmon family.