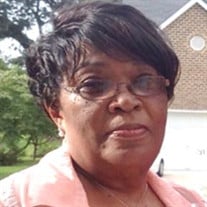 Willie Catherine dropped in on Emma (Hudgens) and William Colemon in Arkansas on August 16, 1937. She had 5 siblings -- William (Little Buddy), Mary (Scoop), Kenny (Buddy), Rosie Lee (Sister) and later her baby brother Predle (Bubba). All , except Bubba, will be there to greet her when she gets home. First and foremost, Willie C, as she was called by most, was a Christian and a Mother. She gave her life to Christ at an early age. She was baptized in Arkansas at Seawell Baptist Church and later joined St. Matthew’s Baptist Church. After relocating to the Washington, D.C. area, Willie C joined New Samaritan Baptist Church, where she remained a faithful servant. Willie C attended and graduated from Marvell High School. While there she met and later married Alvin Allen on November 23, 1957. “Man,” as she was known to call him, and “Puddin,” as he was known to call her, started their married life together in Turner, Arkansas. They were blessed with 6 children – Darlene, Beverly Joyce, Candus T, Linda Deween (deceased), Alvin, Jr. and Iran Glendale. Encouraged by her nephews, Harvey & Henry Johnson and Preston Bobo, they left Arkansas in October 1972 for Washington, DC. In 1980, they purchased a home and moved to Capitol Heights, Maryland. “Man” could not stay for long, God wanted him home. So, on November 22, 1981, he boarded his train for the Heavenly Kingdom. On September 23, 2003, their youngest daughter, Linda, boarded the train for her Heavenly journey and once again Willie C was left behind to carry on. Willie C was a hard worker, starting in the cotton fields of Arkansas. Later she worked in the Kitchen and Dining Hall of NIH and the Dietian Office at Suburban Hospital and many posts in between. More likely than not when you saw her, she was headed to or coming from one of two jobs. Willie C’s role was that of the family matriarch. After her husband died she was both mother and father. Their youngest son, Dale, was 10 when his father died, so he decided he would celebrate her on Mother’s Day and Father’s Day, because indeed she was both. She was their doctor, teacher, mentor and spiritual advisor. She set them straight when they got out of line. Sometimes “a good talking too” was all that was needed, but if not, a switch or a shoe, usually did the trick. She praised their efforts when they tried to do right and encouraged them when they got it wrong. She kept them safe and sheltered through the storms. No food stamps, no welfare, no section 8. She did it all on her own with paycheck and a prayer. Willie C was affectionately called and answered to “Ma,” “Blanche,” “C”, “Catherine,” “Aunt C” and “Ms. Cath.” But mostly, she answered to “Mama,” not just to her kids, but to so many more, including her nephew Preston and goddaughter Roberta (LeeLee) Barnes. She was Grandma and Nana to Andre, Justin, Zenika, Tarleysia, Deonte, DeJai, Nasya, Alaya, Kaela, D’Andre, Paris, Denae, Jourdan, Erin, Amari, Zion, Nassim, baby Ciaria and baby Alvin Dale (both deceased) and Great Grandma to Sean, Elise, Zayden, Landon, Brailee and Leah. To her nephews, she is “C Baby,” to Henry and “Old Shoe” to Harvey. For niece in law Rosemary, she was “gurrrll.” For Laura and Celeste, she was more than a friend, she was a sister. To Margaret, who was a neighbor, friend and mentor when she first moved to Washington, DC, she was “Catherine” and they remained sister friends to the end. For co-workers Ruth, Ann and Nancy, she was a much loved, respected and cherished friend. For other family and friends, too many to mention and too precious to omit, she was a shoulder to lean on and sunshine on a dreary day. Willie C loved to eat out but she was a fabulous cook… Collard Greens, Mac & Cheese, Sweet Potatoes, Black-Eyed Peas and Fried Chicken. Hmm! But she did more than feed your stomach; she fed your soul. She always greeted you with a smile no matter where you were -- home, church or the Mall. She loved music… gospel and soul. Can you hear Mahalia Jackson, Yolanda Adams, Al Green; how about Teddy Pendergrass; the Staple Singers? She loved to travel…Canada, Barbados, Nassau, and cruising the Atlantic. Willie C’s off on her final journey and what a final destination it is...Heaven. There she will be finally and forever free. For now, she has said her goodbyes. The Conductor has called. It’s time to board. Willie Catherine was faithful to the end of her journey on November 1, 2020, when her Lord and Savior called. She knew her journey was at an end; the race had been run, so she answered his call, took His hand and headed home. Streaming live services may be accessed at https://youtu.be/vsIm1bP9Wis

The family of Willie Catherine Allen created this Life Tributes page to make it easy to share your memories.

Willie Catherine dropped in on Emma (Hudgens) and William Colemon...