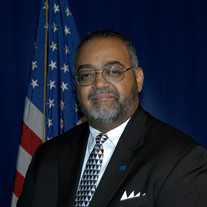 Wyndell C. Watkins Sr. was born on July 17, 1951 in Chicago, Illinois to the union of Richard Watkins. and Corine Stinson (Ray). He was called home by his Lord and Savior Jesus Christ on October 10, 2020. Wyndell, affectionately called “Dell” & later “Chief Watkins”, was raised by his grandparents Mattie and Clarence Sparks in Paris, Tennessee. Chief Watkins graduated from Henry County High School in Paris, Tennessee where he was a proud and talented 1st chair snare drummer and the Co-Captain of the varsity basketball team. After high school he moved to Washington, D.C. and after briefly working for the Federal Bureau of Investigation’s (FBI), he started his career with the Metropolitan Police Department on November 8, 1971. During his tenure he held the following positions: Chief of Detectives, where he commanded the Criminal Investigations Division and the Homicide and Sex Offense branches. He also commanded three federal task forces: The Cold Case Squad, Redrum & The Violent Crime and Gang Task Force. He was also the Director of the Office of Professional Responsibility (Internal Affairs Division) and the Narcotics and Special Investigations Division. Chief Watkins also commanded the Special Operations Division, which was responsible for handling all major demonstrations, escorting the President of the United States and foreign dignitaries, the SWAT team, and Harbor and Helicopter branches. After 26 years of committed service, he retired from the Metropolitan Police Department in Washington D.C. on February 25, 1997, as Deputy Chief of Police. After retiring from MPDC he joined the Federal Governments U.S. General Services Administration as a Senior Executive and subsequently became the National Director of Operations for all of GSA’s 10,000 owned and leased facilities nationwide. On December 30, 2015 he retired from GSA after 17 years of service. Chief Watkins was a graduate of Harvard University’s Senior Executive Fellows Program in Cambridge, Massachusetts, and George Washington University’s Contemporary Executive Development Program in the School of Business and Public Management in Washington, D.C. He also completed course work at American University, the University of the District of Columbia, and the Federal Bureau of Investigation’s (FBI) National Academy in Quantico, Virginia. Dell met the love of his life and late wife, Juanita B. Watkins of Washington D.C., in Washington, DC in 1978. They married on December 20, 1980, in Silver Spring, MD. They shared over 36 loving years together and two children, daughter, Kristian “Krissy” and son, Wyndell Jr. “DJ”. Dell was a devoted family man and was most proud of being a husband and father. At a young age Dell placed his faith and trust in The Lord Jesus Christ and was baptized. He faithfully followed Christ his entire life. He was an active member and served at Revelation Baptist Church of Washington D.C., From the Heart Church Ministries of Suitland, MD, Great Grace Christian Fellowship of Silver Spring, MD. In March of this year Chief Watkins began faithfully attending and participating in the virtual ministries rendered by the Historic Vermont Avenue Baptist Church in the District of Columbia. He was an active participant in the Combined Adult Sunday School Class and the “Prayer & Praise Across the Miles” Virtual Ministry, where he was the featured speaker and Ministerial Lecturer on June 3rd 2020. In his free time and retirement Chief Watkins loved spending time with his family and friends. He was also a life-long fan of sports and competition. His favorite sport to watch was football, and his favorite to play was golf. He was an avid reader of many topics. He enjoyed traveling, especially on family vacations. Dell absolutely loved to listen to music, and he especially enjoyed live music. Another lifelong passion of Chief Watkins was good food, with his favorite food being crispy fried chicken. Dell leaves two daughters, Kristian S. Sheils (Tim) and Drena McDaniel, and one son, Wyndell C. Watkins Jr. (Zabrina), two dear grandchildren, Mariah Watkins & Timothy Sheils, one brother LynDon Watkins (Annette) of Maryland, two sisters, Angela Watkins and Franshawn Watkins of Chicago. He also leaves behind a host of nieces, nephews, cousins, and close family & friends. He is preceded in death by his cherished wife Juanita B. Watkins, grandparents Mattie and Clarence Sparks, parents, Richard Watkins & Corine Stinson, beloved brother, Joseph “Jose” Watkins.

Wyndell C. Watkins Sr. was born on July 17, 1951 in Chicago, Illinois to the union of Richard Watkins. and Corine Stinson (Ray). He was called home by his Lord and Savior Jesus Christ on October 10, 2020. Wyndell, affectionately called &#8220;Dell&#8221;... View Obituary & Service Information

The family of Wyndell C. Watkins Sr. created this Life Tributes page to make it easy to share your memories.

Send flowers to the Watkins family.