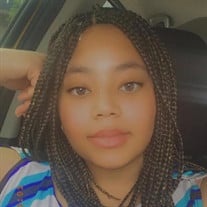 YouTube Live link for Aynisa M. Guardia Funeral Service. https://youtu.be/dUJhUVJRBHUOn February 27, 2021, Aynisa M. Guardia, loving daughter, sister and beautiful soul passed away at the age of 24. Aynisa M. Guardia was born September 29, 1996 in Bitburg, Germany. Growing up as a military child Aynisa traveled the world with her family from Europe, Asia, to Central America. She loved the many cultures she was introduced to, but took the most pride in her Afro-Latina heritage by learning about George Washington Carver to her Afro-Panamanian roots. Aynisa strived for excellence, and saw the best in everyone. When Aynisa wanted to pursue the impossible she would not let anything stand in her way. This was evident when she was inducted into the Kitty Hawk Honor Society, and became the recipient of the Lieutenant General William E. Kepner award from the United States Air Force. and, many more accolades. She began her college years at Old Dominion University, where she made her family bigger by joining the sisterhood of Alpha Xi Delta. She loved her soros just as much as she loved her own siblings. Aynisa then transferred to the University of Colorado Denver, where she earned her Baccalaureate degree in Public Health. While attending the University of Colorado Denver campus Aynisa left a lasting legacy. She was the institution’s founding member, and first President of the Sigma Alpha Lambda National Leadership and Honors Organization which grew to 180 members during her tenure, and is still growing. Although Aynisa’s life threw her many challenges, she overcame each and every one. Aynisa wanted to continue her degree on the path to become a doctor, even though she was told to take a break to focus on her health. Aynisa refused to stop and continued to pursue her Master’s degree. Taking a full load of classes while working at the Veteran Affairs Hospital. She attended her first semester courses, and achieved a 4.0 grade point average; she proved that she could do anything. Aynisa loved the color purple because it represents Wisdom, Peace, Pride, and Independence which also represented qualities of Aynisa. She was a gentle soul that wanted to help kids with disabilities, and became an advocate for kids with Autism as well as, for those struggling with Multiple Sclerosis. She believed in God, and Science; she wanted to help cure diseases, and she prayed daily. Aynisa leaves to mourn her mother Latoya M. Guardia, her father Marco A. Guardia Sr., her brother Antonio, her sister Marisa, her grandparents, numerous aunts, uncles and cousins. To send flowers or a memorial gift to the family of Aynisa M Guardia please visit our Sympathy Store.
To order memorial trees or send flowers to the family in memory of Aynisa M Guardia, please visit our flower store.