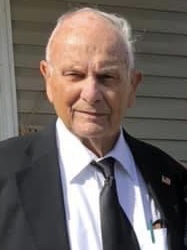 Don Carrol Hockman, 91 of Forestville, MD went home to his Lord and Savior, Jesus Christ, on July 25 th ,
2022. He graduated from MD Park High School in Capital Heights. After graduation, he attended Bell
Vocational School in DC for 2 years. Don learned how to build radios and repair appliances.
From an early age, he developed a passion for automobiles. He loved cars, repairing them and reciting
many historical facts about antique ones he saw from time to time. He also loved animals, especially
dogs. He was described as a humble man, who loved his family deeply. Don was a great listener who
was always willing to help others.
Don was a devout Catholic and servant of the Lord. During his youth, he was an altar boy and in his
adult years served as an usher at Mt. Calvary Catholic Church.
He served his country during the Korean War through the United States Navy. He later became part of
the reserves within the Naval Construction Battalion, better known as the Navy Seabees.
Don worked for the Local 26 International Brotherhood of Electrical Workers (IBEW) as a Contractual
Electrician during his career. He also worked for the Metropolitan Washington Airports Authority as an
Electrical Crew Leader.
He was a lifetime member of the Knights of Columbus and participated with the Catholic War Veterans.
He was married to Geraldine for 71 years. He is survived by his wife, and children; Michael, Lisa, and
Christina (Justin). Grandchildren, Kerry (Kecia) Curtis, Richard, Emily León. Great grandchildren
Kimberlee and Kylie.
Don was preceded in death by his parents (Elmer and Hazel), three brothers (Elmer, Louis, and John),
and granddaughter (Tiffany Dugas).
The family will receive friends at Lee Funeral Home, 6633 Old Alexandria Ferry Road, Clinton, MD 20735
on Friday, August 5 th from 10:00 am – 12 pm. The Funeral Service will be held immediately

To order memorial trees or send flowers to the family in memory of Don Carrol Hockman, please visit our flower store.